Strike is the latest disruptor in the estate agency industry which is succeeding, at very least, in making traditional agents uncomfortable. Nigel Lewis asks the questions. 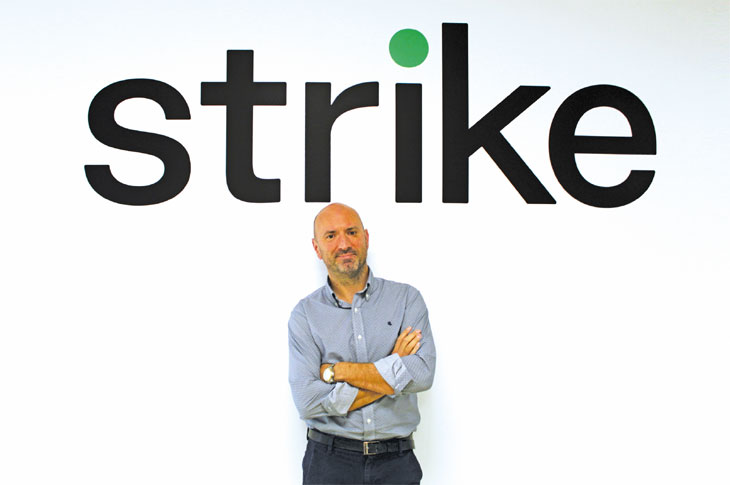 Strike is an opinion divider within the property industry. Applauded by some as a novel way to offer estate agency services, it is reviled by others for turning the industry model on its head. And some have gone as far as to say it ‘demeans’ the work of the industry’s tens of thousands of agents.

Strike, which has been going in one form or another for 14 years and is based in Colchester, Essex, is like many of the other hybrid agencies except for two key differences – its basic service is free for vendors to use, charging £599-£799 for an optional ‘marketing boost’ package and £699 for an accompanied viewings service. All of its employees, including the firm’s local representatives, are employed directly.

At Strike, we’re trying avoid a squareoff with other agents. But it’s hard to avoid when you’re ‘free’…

For vendors who do not pay for its ‘extra’ services, Strike then hopes to make revenue from referral fees from mortgage and moving services providers. There is a tinge of Purplebricks in its marketing copy – “changing what it means to be an agent” claiming to be the “fastest-growing estate agency in the UK”. This sort of blurb, along with its ‘for free’ business model, have irritated many traditional agents largely because the claims challenge the wildly-held assumption that only well-paid agents are incentivised to get the best price for a vendor.

Nevertheless, such challenges have not prevented the company, which changed its name from HouseSimple in July 2020 to Strike, landing some £30 million in funding to date and now claiming a near national coverage for its service. This includes, in July last year, some £11 million raised from several investors including Channel 4’s investment arm, to fund this expansion.

The Negotiator sat down to talk to its CEO and former Rightmove senior Sam Mitchell (pictured above) to separate the tech hype from the reality on the ground.

How is Strike performing?

“There is no doubt that Strike is now getting legs and momentum is building – according to Zoopla we are the second biggest estate agency brand in the UK in terms of new listings, we have five per cent market share in the northern regions we first launched into as Strike, and in half a dozen places we’ve hit ten per cent,” says Mitchell. “In London we’re getting through the door to do valuations plus our financial services model is working too – we hit £100m in value of mortgages arranged during the first months of the year. “And during one week we achieved 60 per cent of Purplebricks’ sales volume – which is good given we’ve only been national for a few weeks.”

Isn’t that because you’ve spent millions on marketing?

“When we go into a region, yes, we go very aggressively with marketing during the initial four months until we are in the top three by market share at which the boards do their work – and that’s sustainable.”

“Our average vendor is a 47-year-old selling a three-bedroom £295,000 semidetached house to a 41-year-old, both of whom are happy to use tech to help them sell their home. So not just millennials and early adopters.”

Aren’t you gaining share just by offering a free service?

“Yes, you can retrofit that as a reason. But if a vendor is prepared to get the photos done and accept viewings, it’s more than just trying something out.”

“There is a psychological power of ‘free’ which is important to understand. If you charge 99p you are seen as cheap, but if it’s free you’re smart and clever for getting something ‘for free’. But we’ll only win ultimately if we’re good at selling houses and for us it’s the ‘word of mouth’ halo effect that people create ‘at the school gates’. That’s how you really win.”

Isn’t it true that agents, not brands, sell properties?

“Yes, I agree that it’s people who sell property and we hire staff based on character not industry experience, so I don’t mind whether they’ve been agents before they join us – or not.”

“We ask them to submit a video talking about something they are passionate about for a minute and, if they are successful, follow this up with intensive training. We get them to lead with data at instruction rather than opinions and wear polo shirts not pinstripe suits. And they are paid on net promoter score [which captures customer satisfaction]. Therefore, the whole experience feels very different to a traditional agency.”

Are you aware that many agents strongly dislike your marketing?

“At Strike we’re trying avoid a square-off with other agents. But it’s hard to avoid when you’re ‘free’ and lean into that sometimes about how much money consumers are saving.”

“Nevertheless, there are some very good traditional agents out there – the top ten per cent who are the local experts, who know the market inside out. But, dare I say it – the ones who are most vocal about us and hybrid agents on the property forums are probably those ten per cent. On the other hand, there is a long tail of very average agents out there delivering a pretty average service.”

“But I would rather focus on the things that differentiate us from traditional agents and be positive. I try to focus on where we’re strong rather than taking too many cheap pot-shots.”

Have you got data that proves your referral fees model works?

“Every property we list generates ten buyers and we’ve become very effective at talking with those people about financial services because most buyers take advice early in the process but are agnostic about who they use as long as they are treated well throughout the process. Therefore, most of our mortgage sales are non-Strike sales. There’s a massive opportunity there – I expect us to arrange £1.5 to £2 billion of lending over the next 12 months.

Why change your name to Strike?

“We needed a fresh start with the new concept and that’s difficult when you’re carrying a ten-year legacy within the sector. I had an issue with the HouseSimple name because although it explained what we did, it was difficult to say on the phone as it sounded like ‘how simple’.”

“I talked to an agency, and we agreed that the businesses needed a more disruptive name and Strike felt invasive and almost waving a placard in your garden rather than a ‘for sale’ board. And Strike has more creative opportunities – ‘strike up a conversation, strike gold, strike a better deal’.

“I get that there are negative industrial action connotations but that annoys employers rather than employees.”

How did rapper Tinie Tempah get involved?

“It was a Channel 4 connection – I met him at a meeting at the station when we were looking for someone to play a relevant role in social media promotion, and he became an investor too. He was presenting Channel 4’s Extraordinary Extensions show.”

Some agents say ‘free to list’ is just the last throw of the dice, what do you say to them?

“Frankly, we launched ‘free’ in Yorkshire during January 2019, so we’ve been doing free for a long time and all the investors keep doubling down as we have gone into new areas and increased market share. The model is working . There’s no guarantees in life but it’s got all the hallmarks of something that’s going to sneak up on people. Because we’ve grown regionally, we’ve kept a low profile but that’s hard to do now that we’re exposed to the London property market.”

Sam is one of the growing army of Foxtons alumni within the industry, having begun his property career at the London estate agency within its financial services division in 2006.

A year later he had risen to be one of the firm’s two sales directors at its mortgage arm Alexander Hall, then two years later was appointed to a senior position at its lettings operation where he managed some 16,000 tenancies.

He left Foxtons in 2010 to take a Regional Manager position at Your Move running its London division but four years later joined Sotheby’s International Realty as its CEO.

But after just eight months he jumped ship to head of Rightmove’s lettings operation before, in 2018, joining HouseSimple where he has been for the past four years, leading its efforts to launch a national ‘free to list’ offer and a name change.

2007 Agency gains widespread publicity as one of the first ‘online agents’ to sell a £3m+ property.

That year, after years of ‘bootstrapping’ the agency, the Goslings attract major investors including former Carphone Warehouse CEO Andrew Harrison.

Sophie Gosling quits as a director, while Alexander continues for a while as CEO.

Soon afterwards Alexander steps down to become President, ushering in the Sam Mitchell as CEO.

Harrison also helps bring a string of high-profile investors onboard including Freston Ventures, Tosca fund, SPW One and Channel 4 Ventures. Between them they have – so far – sunk £30m into the agency, including £20m in 2018.

2019 HouseSimple Kicks off a major advertising push and rebrand of the agency following the change in funding.

2021 It raises a further £10 million from existing investors and also changes its name to Strike. Begins roll-out of ‘free’ model mainly in the NW of England and, after a pilot run, begins adding new regions and cities to its territory before, this year, adding London giving it a claimed national reach earlier this year.