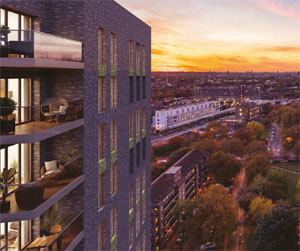 137 homes were snapped up in less than eight hours during Bellway Homes’ Help to Buy event in March. First-time buyers arrived at 6am to secure their place in the queue and their plot of choice at one of eight developments across London.

The general feeling in the queue was that without the Government-backed Help to Buy scheme they would not be able to afford to get on the property ladder in the capital. Haart’s latest Market Monitor data found that 10 buyers are chasing every property on the market across England and Wales, so it was no surprise to Bellway Homes that so many people arrived.

Apartments at Kent Wharf, a new development Deptford, were the most popular with 31 homes secured on the day.

Purchaser, Joe Fitzsimmons, 25, wanted a one-bedroom apartment at Kent Wharf. He said, “Without Help to Buy we would not be able to afford a home. We wanted a new build and I grew up in the area. Kent Wharf is close to Greenwich, which offers excellent entertainment and nightlife as well as great transport links.” Joe did secure the apartment that he wanted.

Other homes sold included 25 at Barking Riverside’s Caspian Quarter, 15 at Lansbury Square in Poplar and 10 at Elmington Green in Camberwell.

Across North London and Surrey homes sold included: 21 at Avedis in South Ruislip, 17 at Drayton Garden Village in West Drayton, 11 at Crossways in Slough and seven at Sovereign Place, Horley, Surrey.

Bellway Homes has one of the largest Help to Buy portfolios in the capital. In the six months to the end of January 35 per cent of sales were using the scheme, up from 29 per cent in the same period the previous year.

Jason Honeyman, Southern Regional Chairman of Bellway, said, “We released many new homes available at a selection of our new sites across London at the event and potential purchasers were offered independent financial advice so they could see how affordable it can be. We are delighted that the event was so successful and that we could help so many people purchase their first home.”

Lingfield Apartments form part of L&Q’s ambition to deliver 25,000 homes for the Private Rented Sector (PRS) in its long-term pipeline – which will make the housing association one of the largest PRS providers in the country.

Erdal Kacar, Operations Manager for PRS and IMR said; “By offering Private Rented Sector homes within desirable award winning developments such as Stadium Place, L&Q and other housing associations are helping to ease London’s housing shortage. We are bringing consistently good quality homes onto the PRS market, while offering excellent customer service to our tenants.”

Adam Hesse, Planning Director at land brokers Aston Mead, is calling on the UK’s villages to take the lead in house building to produce over 300,000 new properties.

“I propose that every village in the country agrees to build between five and ten new homes over the next five years. Instead of having hundreds of homes imposed on them by big construction companies, the villagers could play a part in deciding where these new homes are built, their size and cost, and what they look like.

“This would help to ensure vibrant communities, boosted by new families. It might also prevent the closure of shops or pubs through lack of support, as well as avoiding an unsustainable level of demand on the local infrastructure. With over 30,000 UK villages, that’s an additional 300,000 properties that would not have been built.”

Adam Hesse says that this would be in addition to the creation of 14 ‘garden villages’ from Cornwall to Cumbria already announced, creating 48,000 new homes.

“Understandably, people living in villages are concerned about changes to their surroundings and way of life. This can lead to charges of ‘nimbyism’ – whereas in fact it’s more often a reasonable fear of transforming the character of these villages forever.

“So let the construction giants play their part in towns and cities which can accommodate the level of housing required. But in our villages, get small and medium-sized enterprises (SMEs) to consult with the community and build up to ten properties, designed to suit each village’s requirements.”

New Residential data from JLL shows that the mood in the Central London development market brightened during late 2016 and early 2017 – but it remains subdued relative to the past five years with activity slowing in response to a more challenging sales market.

Neil Chegwidden, Residential Research Director at JLL said, “Activity in both the Central London and Greater London Development markets has slowed over the past year indicating a concerning trend that the Capital’s housing supply problems are set to continue. This is despite the Mayor’s initiatives, the Housing White Paper and the growth in the institutional private rented community sector. New unit starts have slowed in Q4 2016 while the under construction total is expected to deplete further during 2017.

“The Central London new build sales market is showing encouraging signs of improvement in late 2016 and early 2017. The first half of 2016 was impacted significantly by the additional stamp duty change and concerns surrounding the EU referendum. The Brexit decision further impacted activity in Q3 but we have seen some price rises and scheme successes in the final quarter of 2016 and also in 2017 with more buyers navigating the new market conditions. However, we have seen a reduction in scheme launches as developers have responded to easing sales volumes in 2016.”

Adam Challis, Head of Residential Research at JLL adds, “We expect 2017 will be another year of adjustment, albeit with greater upside potential than had been anticipated in the immediate aftermath of the EU referendum decision. We are predicting demand to increase slightly during 2017.

“We are forecasting sales prices to remain flat during 2017 as the number of unsold units increase, despite the volume of new launches being held back.”

Build to rent is big in Bath 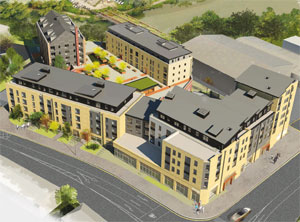 Legal & General is to create over 170 new Build to Rent (BTR) homes in Bath, having acquired a city centre development site for £47.5m. Legal & General now has a total housing pipeline of over 70,000 units, of which 1,200 are BTR homes. 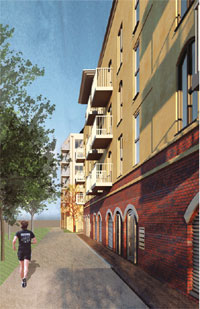 This is Legal & General’s fourth BTR scheme, with existing sites progressing well in Bristol, Salford and Walthamstow. It has £1bn of firepower to invest in developing new large scale rental development properties which will provide rental income for pension funds to pay their pensioners and create an economic stimulus for UK urban regeneration areas, delivering new jobs and growth. Legal & General has invested £10bn in UK infrastructure, with an aim to invest £15bn.

Roseberry Place is ideally located on brownfield land in the Bath City Riverside Enterprise Area on the river, which represents the best opportunity to accommodate new development growth in the city. The site will have 171 apartments, 126 car parking spaces and 17,000 sq ft of retail space.

Dan Batterton, BTR Fund Manager at LGIM Real Assets, said, “This acquisition is a prime example of the type of compelling opportunities there are in the market at the moment, as we continue to build our pipeline. We are targeting well-located sites where there is the opportunity to influence all aspects of design and construction from the start to create a best-in-class product that will provide a positive lifestyle choice for elective tenants.”

New landmark in the Lacemarket 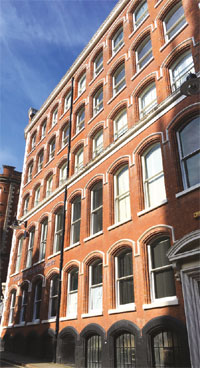 Perrymead Estates has released for rental the first eight apartments in its ongoing £5 million renovation of buildings around St Mary’s Church in the heart of Nottingham’s Creative Quarter.

The Nottingham based developer has spent 18 months converting the Grade 2 listed Georgian townhouse into luxury residences.

The building shares an elegant courtyard with the former Lizard Lounge nightclub, which the company is converting to eight office studios called The Garage Studios.

The third phase is Sutton Place, the six-storey former lace workshop overlooking St Mary’s Church at 49 Stoney Street, where Perrymead has applied for the creation of a further 21 Luxury apartments, also for rent.

Oliver Wheatcroft, director of Perrymead Estates, said, “Nottingham’s crown jewels are its Lacemarket buildings, and the area is now a tranquil oasis in the middle of the city.”

“The specification of the apartments is something rarely seen outside of London, and very personal attention has been paid to the specification, whether it be the tiles sourced directly from Valencia, or the bespoke kitchens from Nottingham specialist Town & Country joinery,” added Oliver.