Hunters reports profits up by 46 per cent 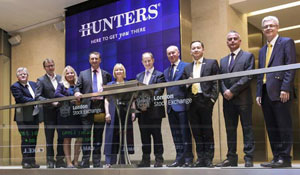 Hunters opened its first office in York in 1992, launching its first franchised branch in 2006 and has continued its rapid growth to field over 170 branches nationwide, with offices in a number of key regions across the UK including London, Oxford, Norwich, Middlesbrough, Manchester and many locations in between.

Kevin Hollinrake (left), Chairman and founder of Hunters, said, “2015 saw a step forward in pursuit of the Group’s clear ambition to become the nation’s favourite estate agent. Having opened 63 branches in the last two years through organic growth, we are without doubt the fastest growing business in our sector. In 2015 we secured additional capital, added 32 new branches to the network, including 23 independent businesses, and added another 23 branches through the purchase of a highly successful home counties franchised chain, Country Properties.

“Our average branch revenue rose by 5.6 per cent to £178,000, a tremendous achievement against the background of a more subdued market.Independent agents that converted to the Hunters brand, for whom 2015 was their first full year as part of the network, increased revenue per branch by 29 per cent, a clear illustration that our quality, well known national brand and good reputation has delivered improved income for our network partners. Customer satisfaction will always be a key measure and we achieved 96 per cent customer satisfaction for the year.”

Market activity levels so far this year are 14.1 per cent higher compared to the same period last year. The first quarter has started well, with seven new branches opened, revenue ahead of Q1 2015, ahead of general market trends, plus a pipeline of new branches that is running significantly ahead of 2015.

Hunters joined the AIM market of the London Stock Exchange in July 2015.