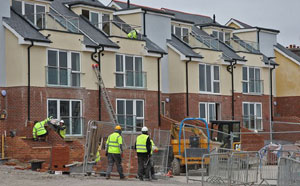 36,566 new homes were registered by NHBC in the first three months of the year in the UK, according to NHBC’s latest new home registration statistics.

The overall number is 9 per cent down on the same period last year when 40,144 new homes were registered. However for the financial year 2015/16, registrations remained in line with the previous year with 152,329 new home registrations, marginally ahead of the 152,262 registered in 2014/15.

There was also a 10 per cent increase in the number of new home completions for the financial year up to the end of March, compared to 2014/15, with 137,396 completions in total. This increase mirrors the strong growth seen in registrations in recent years, resulting in these new homes being completed over the first few months of 2016.

NHBC Chief Executive Mike Quinton (left) said, “Our latest statistics show that the industry is consolidating on the strong growth in registrations seen in recent years. Registrations are now around 80 per cent higher than the depths of the financial crisis in 2008/09, driven by increased activity from private sector housebuilders.

“Because of the increase in registrations we are now also seeing the resulting completions come through, as reflected in the 10 per cent rise in the number of new homes completed in the financial year.”