Carol Smillie is the new ‘face’ of EweMove’s

Ewemove steps up it's marketing campaign. No jokes about looking sheepish, please! 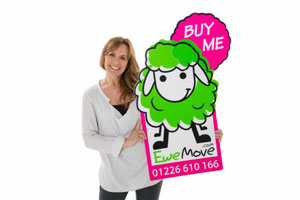 Ewemove reports a 69 per cent surge in online sales valuation enquiries within three weeks of engaging Carol Smillie (right) as a brand ambassador.

Carol is known for her role with the BBC’s Changing Rooms series, Glenn Ackroyd (left), Head Shepherd of EweMove, said, “We’re absolutely delighted to have connected with such a high profile property personality. Our research showed that she commands a high level of trust and she’s well known by our target customer demographic so we knew she’d have a big impact, but we’ve been blown away with the response so far.”

“During our discussions with Carol, we hit on the idea of introducing her to some real customers to get a feel for why we’re different to other agents and we filmed the interviews. The results were amazing and we’ve added some of the footage to our website, and to www.carolinvestigates.co.uk.”

In addition to the increase in online sales valuation enquiries, the firm saw a 51 per cent increase in lead conversions. Glenn added, “It’s very early days, but our Marketing Team are very excited by the initial results. On the back of the influx of new enquiries, we’ve had two consecutive record months for new property listings and that’s helped us to smash past 1,000 live properties for the first time and we look set to break 1,500 in the next quarter.”

Digital is the next battleground for estate agencies, says leading supplier