Fees to tenants should be banned

LibDems demand that all letting agency fees to tenants should be outlawed. 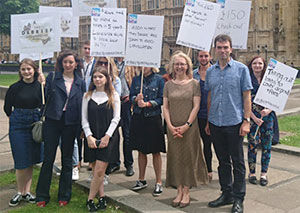 Liberal Democrat Parliamentarians pressed the Government to ban letting agency fees and clamp down on rogue landlords in a Private Members Bill debate in the House of Lords.

Baroness Olly Grender, Liberal Democrat peer, who was formerly a senior figure at Shelter, introduced the Renters’ Rights Bill to protect the growing number of private tenants who currently face what she describes as ‘huge costs’every time they move.

The Bill, which is supported by Generation Rent and The Debrief’s “Make Renting Fair” campaign, has now passed its second reading and proposes to:

Baroness Grender (left) said, “Agents often levy letting fees on tenants for things which should be paid by the landlord.

“They can be charged registration fees, credit check fees, reference check fees, renewal fees, name change fees, exit fees… the list goes on. Almost all of them arbitrary and disproportionate. Yet tenants are powerless to do much about it.

“There is a huge amount of support for reforming renting and banning fees, but the people who still need convincing are those on the Government benches. It is time for them to recognise the pro-consumer case for taking action, start championing renters and stop rip-off fees once and for all.”

Tom Brake MP added, “We clearly have a rental sector which is broken. Many people are paying vast amounts in rent and fees while having to put up with poor conditions and uncertainty.

“There is no silver bullet that will solve London’s housing problems, because the fundamental challenge is a lack of supply which takes time to fix. But there are things that can be done to make renting cheaper, safer and more secure and they must be done now.”

“We are in the midst of a housing crisis. Frankly I’m surprised it’s not yet called a housing disaster. We simply don’t have enough homes and a buy-to-let boom has trapped more people than ever in the private rental market.”