Sign in or Sign up
The essential site for residential agents
Home » News » Land & New Homes » Good news in the race to build new homes!
previous next
Land & New Homes

Good news in the race to build new homes!

16,000 jobs and 10,000 homes to be created by Enfield Council as Barratt London appointed as Meridian Water master developer.

Good news for Sadiq Khan’s (right) housing plans – Enfield Council is to create 16,000 jobs and 10,000 homes on its £3.5 billion development Meridian Water. The Council has also appointed Barratt London as the master developer, working with SEGRO as a development partner on the urban logistics element of the project. 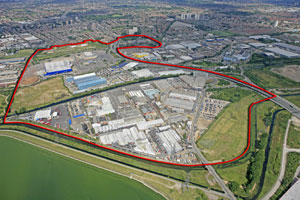 The project will provide 10,000 homes, 6,000 permanent jobs, 10,000 jobs in the construction industry, and supporting infrastructure including a railway station, shops and other community facilities in a beautiful waterfront setting. As one of the biggest developments in the United Kingdom and one of the largest housing developments in London it will also play a major role in helping to ease the housing crisis in the capital.

Meridian Water has already been given housing zone status by the government meaning it will be easier and quicker to provide new housing on the site than would be normal. But the scheme will also see significant investment in the area’s community facilities and transport links which will improve connectivity between north London and the Lee Valley corridor and help to add an estimated £3 billion to the UK economy by 2036 by stimulating growth elsewhere in the region.

Enfield Council’s Cabinet Member for Housing & Housing Regeneration, Cllr Ahmet Oykener, said, “It is incredibly exciting that we have appointed Barratt London & SEGRO to make Meridian Water a reality. Now we can start getting boots on the ground and proceed with this transformational project for Edmonton and the wider area and create a truly world class development which will improve the quality of life for tens of thousands of people.

“Meridian Water will play a huge part in helping to ease the housing crisis in London and will provide fantastic quality accommodation to thousands of families. It is a truly huge project which demonstrates Enfield Council’s commitment to improving the quality of life for its residents.”

Enfield Council’s Cabinet Member for Economic Regeneration & Business, Cllr Alan Sitkin, said: “Meridian Water will give an enormous boost to the construction industry both in London and the United Kingdom creating thousands of specialist jobs as we create a legacy of opportunity, investment and employment in London.