Gavin Barwell, MP for Croydon Central takes on a dual role with the additional job of Minister for London. 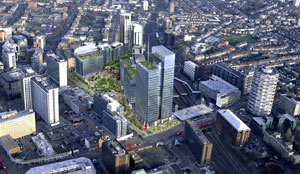 Gavin Barwell MP, is the new Minister of State for Housing, Planning and Minister for London.

He joins the team at Department for Communities and Local Government, who are being led by Sajid Javid, Secretary of State.

Gavin (left) is MP for Croydon Central and he takes over from Brandon Lewis, who has moved to the position of Minister of State for Policing and Fire Service.

When his appointment was announced on Sunday (no rest for the new Government!) he said, “Yesterday afternoon, I took a call from the Prime Minister (I was half way up a tree at the time midway through sawing off a branch and Croydon Central came pretty close to having a by-election…). I am hugely honoured that the Prime Minister asked me to serve in her Government as Minister of State for Housing & Planning and Minister for London.

“I look forward to working with councils, housing associations, developers, investors and local communities to make sure we build we need with the mix of tenures that people want and that those homes should be great places to live.”

Gavin has been MP for Croydon Central since 2010 when he won the seat with a 2969 majority. In 2015 he increased that majority by 3096 votes. He is married and has three young sons. He is also, according to his Twitter page, a “Sports and Tolkien nut.”

In June 2016 he was threatened by a man at his Croydon surgery, who was said to be furious, making ‘very wild’ allegations about local police and Polish politics. Brandishing a knife, he threatened to attack – and kill – Mr Barwell. The police were called and the man was detained under the Mental Health Act.