Dream of homeownership slides across the UK

New analysis by The Resolution Foundation suggests that the cost of housing crisis has spread.

New analysis from The Resolution Foundation has found that home ownership becoming an increasingly unrealistic dream for many younger families. While many commentators say it is a London-centric issue, there is growing evidence to suggest the crisis is spreading across the rest of the country – with Manchester and other big northern cities leading the way. 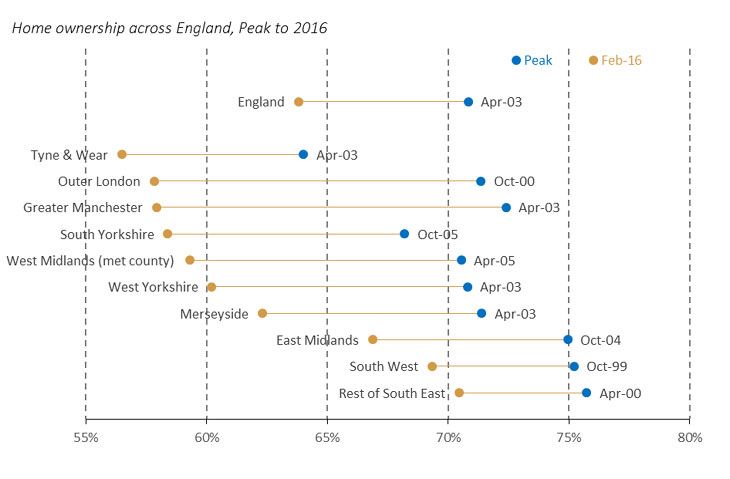 Yet, says Stephen Clarke (left) in the report, “While the fall from peak ownership in the early 2000s has been sharp, the last English Housing Survey offered some hope that overall home ownership rates may have started to level out. No such luck, the modest apparent uptick in 2014 looks increasingly to be no more than a blip. More timely data from the Labour Force Survey suggests that the downward drift has continued into 2016. As a result, English home ownership now sits at just 63.8 per cent – taking us back to levels last seen in 1986.”

“Back then, the average first time buyer paid just under £30,000 for their new home. By 2015, the figure topped £150,000. With prices – and deposits – continuing to rise even as incomes have stuttered in recent years, it’s not hard to see why increasing numbers have become locked out of home ownership.

“In central London the average first time buyer paid just shy of £330,000 in 2015, helping to explain why just a third of households are owned. But the capital has always looked different, even at its peak home ownership only just topped 40 per cent. If it’s the decline of the property owning dream that we’re focused on, then we need to look outside of inner London. 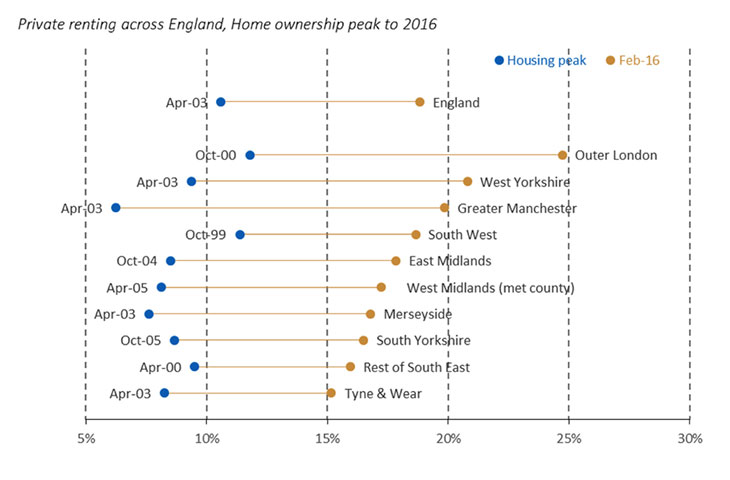 Indeed, the area with the sharpest drop in ownership over recent years is Greater Manchester where ownership has plummeted 14 percentage points from its peak in the early 2000s.

“Fewer than six in ten households living in the region own their own home today – a similar level to the London suburbs. Double digit falls in home ownership have also been experienced in South and West Yorkshire, driven by Sheffield and Leeds, and the West Midlands Metropolitan Area.