Economic risks and uncertainty point to house prices falling by 1% in 2017.

Countrywide believes that the Brexit vote has unsettled the UK economy, with  uncertainty surrounding the arrangements for leaving the EU and the effect it will have on trade and future economic growth.

They expect a weaker economy and for this to affect house prices and transactions through consumer confidence, household incomes and the labour market.

This is not the only factor affecting the path of house prices. Higher stamp duty continues to take its toll on the top end markets and after several years of double-digit price growth, expectations of future capital gain have weakened in many areas leading to reduced demand.

Fionnuala Earley (left), Countrywide’s Chief Economist, said, “Forecasts in the current environment are trickier than ever as the vote to leave the EU has thrown up many risks. Our central view is that the economy will avoid a hard landing, which is good news for housing markets. However, the weaker prospects for confidence, household incomes and the labour market mean that we do expect some modest falls in house prices before they return to positive growth towards the end of 2017 and into 2018.

“Not all of the corrections are due to the vote to leave the EU. Stamp duty and weaker house price growth expectations, particularly in London’s prime markets, have a part to play. There are supports to prices on the supply side from the continuing mismatch of supply. On the demand side, ultra-low interest rates and the significant discounts available to overseas buyers resulting from the fall in Sterling will help to support prices too.” 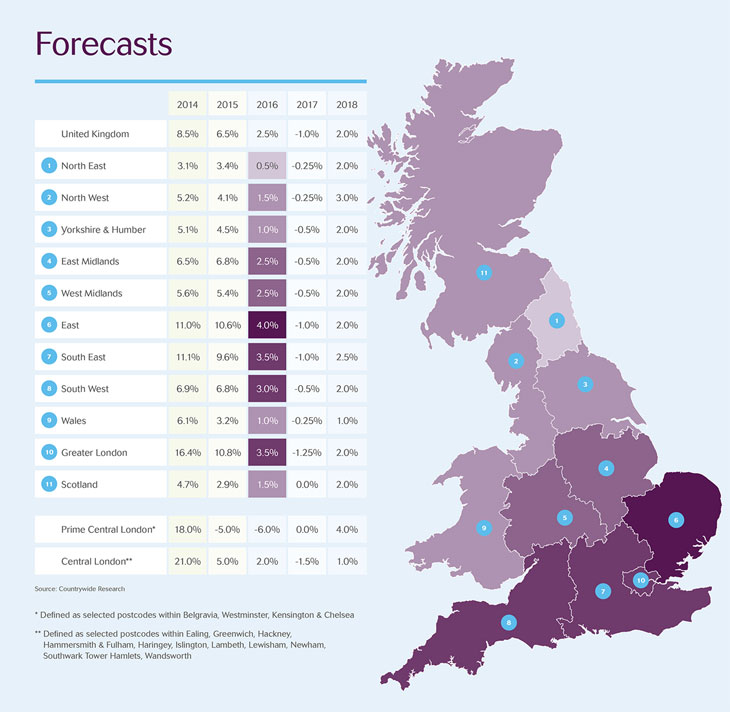