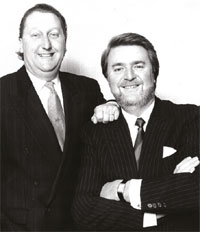 The Robinson Jackson Group is celebrating 25 years of business in London and Kent. The milestone has been reached in tandem with a successful network of 25 branches and 25 new recruits joining the agency in the first quarter of 2018.

The agency’s co-founders, Peter Jackson and Alan Robinson, opened their first Robinson Jackson branch in Northumberland Heath in 1993, together with Senior Partner Vince Hedges. All three are still actively involved, alongside many staff members with 10, 15 and 20 years of loyal service.

The Robinson Jackson Group was formed after Peter Jackson’s family estate agency – Jackson Property Services – was bought by the Halifax. Peter says, “After 25 years with Jacksons, we didn’t envisage we’d have another 25 years of success with The Robinson Jackson Group but here we are. Our longevity is down to our community roots – our familiar name and solid reputation continues to be a comforting presence on the High Street. Our 25 new employees and existing staff are a source of great pride. As well as allowing ambitious property professionals to progress their careers, we actively recruit those with no agency experience, meaning bright, enthusiastic people can join our family-led culture.”