Sign in or Sign up
The essential site for residential agents
Home » News » 2018: make or break for PropTech
previous next
Proptech 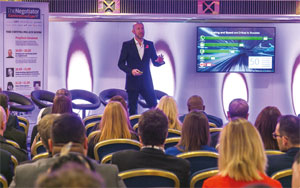 The next twelve months are likely to be a tipping point for technology in the housing market, say the leading PropTech figures.

At The Negotiator Conference, Steve Hyde, MD of Google Partner, Push (pictured) presented his vision of the changing landscape of online marketing – and how agents can be ahead of the curve.

Paul said that although the past two years had seen a huge “flurry of activity” in the proptech world, he thought it was time for them to deliver. “A lot of these businesses are getting to the point where there needs to be either good traction in terms of customer usage or product deployment.”

“I think the rubber needs to start hitting the road a little bit and the next year will see of the proptech companies either coming through and making a success of it, but inevitably some are going to fail too.”

I think the rubber needs to start hitting the road… some will be successful but inevitably some are going to fail.

James from Matterport said he agreed that the past two years had belonged to PropTech, and that he believed that recently there has been a tectonic shift in many agent’s willingness to adopt technology.

“I think we will see agents become more tech enabled and innovative about how they do their agency work,” he said.

Paul said that the young people born after the Millennium coming through to the property market at the moment, unlike previous generations they expect everything to be automated and 24-7. “So I think the industry needs to react to that because we are going to see a huge shift in the rental market in the next three to ten years,” he said.

However, he also sounded a warning that agents should be wary of the big global tech giants.

“If you look at the business models of the 1980s and 1990s you had very clear boundaries, but when you look at companies like Airbnb you realise they are both collaborating and competing on different levels – so it’s not a clear like is used to be, and may never be again.

“Also, look out for the big online companies like Facebook but also Google, which has tried before, leveraging their power and size in the property market.”