...but they don't because of the lack of suitable housing. 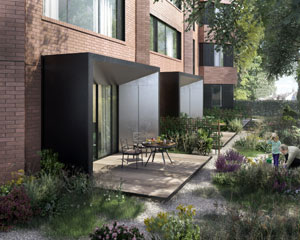 One in five (19 per cent) homeowners aged 55 or over considered moving in the past two years but have not done so; equating to more than 2 million homeowners.

• 23 per cent of homeowners aged 55 or over who considered moving say lack of suitable housing was the main reason they did not do so.  This equates to more than 500,000 homeowners.

• The stress and upheaval of moving as well as not wanting to be away from friends, neighbours and community are also obstacles to moving.

• Last time buyers may be put off from buying new build homes because they don’t meet their needs.

According to the annual Homeowner survey conducted by YouGov for HomeOwners Alliance and BLP Insurance, 6 per cent of homeowners age 55 or older say they have moved in the two past years and a further 19 per cent have considered moving but not done so – the equivalent of more than 2 million homeowners.

A lack of the right kind of homes is the main reason for older homeowners deciding to stay put (23 per cent of homeowners age 55+ who considered a move in the past two years say this is the primary reason for not moving).

When considering new build properties as an option, older homeowners see new builds as being particularly strong on low running costs (52 per cent) but less likely to deliver on spaciousness of rooms (23 per cent), the amount of available green space (23 per cent) and providing living on one level (12 per cent). Being near to amenities and good transport links are also aspects that are seen as less typical of new build homes.

There is hope that more builders are recognising this preference for new build homes; The photo shows a new development in Purley, Surrey, which offers lovely homes which have been designed to meet the needs of retired people, modern, easy to run and near all amenities. Carriages is being constructed by Pegasus Homes and Frosts Estate Agents is marketing the properties.

Paula Higgins, Chief Executive Officer of HomeOwners Alliance, said, “The recent Brexit decision means we are now in the midst of uncertain times and new housing is likely to be a victim. Government needs to focus efforts on negotiating a European exit but they must not drop the ball in delivering new housing that meets the needs of last time buyers. House builders can’t be allowed to sit on their hands and land bank. The government needs to keep them building and building houses that meet the needs of last time buyers as well as first time buyers.”

Kim Vernau, Chief Executive Officer, BLP Insurance, said: “The issues highlighted by this survey that face last time buyers are as acute as those issues encountered by first time buyers. If we wish to provide the required quality of housing that addresses these concerns we desperately need an appropriate mix of well-designed homes alongside adequate local infrastructure to help address the current housing shortage.”