Richard Jacques, a former director at Purplebricks, has launched Investerge, a new investment platform. Nigel Lewis met him for an exclusive interview. 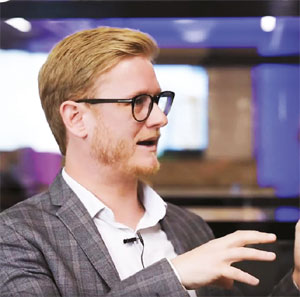 Richard Jacques, the former Lettings Director at Purplebricks, was on a roll on the day I went to meet him at a flexible workspace near Oxford Street.

Richard was in full swing, launching his investment platform Investerge on that same day with several colleagues in tow – explaining how his new venture will, it is claimed, revolutionise the property investment market.

Platforms like his are not usually of much interest to estate agents; they cream off some investors from the auction market and others from new build sales but, while some agents are more than happy to help clients build up portfolios, in most areas it’s a relatively niche part of the market.

A new source of revenue for estate agencies

However, the reason we’re here is that Investerge claims to be a new a source of revenue for agents in today’s more challenging times. Jacques says that Investerge will create a level playing field for investors and claims it’s already initiated property deals worth ‘multi millions of pounds’.

We provide agents with a way to work on their own database of clients for whom they may not have properties today.

Jacques says his platform will introduce investors to properties rather than sell to them and help estate agents earn more commission. So does that stack up?

The 32-year-old says he wants to bring all the UK’s investment properties into one central location or platform, instead of investors having to visit multiple different estate agents, brokers and investment companies.

Jacques says during his six years at Purplebricks he saw how people were quickly embracing technology when it made their lives easier – and he believes his new business will do the same for property investment.

“What we provide are predominantly off-market properties that aren’t going to end up on Rightmove, Zoopla or OnTheMarket – or any other portal,” he says. “What we provide to estate agents is an excellent way to work on their own individual data bases of clients who they may not have properties for today, that they can then lead generate to us.

“Because the properties we can offer them haven’t appeared on the portals, the investors get access to something exclusive, and the estate agent is able to earn commission off the back of the sale.

“We earn off the seller in the normal way an estate agency would and we pay part of that fee to the agent involved for the introduction.

But Jacques says he isn’t trying to replace agents and that his service is merely a bolt-on to what they already do.

“Agents can log-in anytime and see what the investors they have introduced to us are doing and which properties they are looking at; it’s transparent.”

Jacques claims his new service is designed to attract UK investors in HMOs and traditional buy-to-let properties but also foreign investors buying at a distance, helped by the current exchange rate fluctuations.

“Currently, investors liaise separately with a sales agent to buy the property, a lender to get the loan and a letting agent to manage the property but we can do all that from one place in a transparent way,” says Jacques. Investerge outsources property management to its lettings partners, who use an API plugged into its platform so that investors can do everything from one place.

WHY THE MADE-UP NAME?

Jacques says they toyed with several names before settling on Investerge, which is a mix of ‘invest’ and ‘concierge’ and a nod towards the ‘one stop shop’ approach to investment that the platform takes.

“You never know quite what the name is going to end up being, but as long as it has a relevance to what you’re trying to achieve then that’s OK,” he says.

“People have asked why I didn’t choose a word that people might recognise, but I point out that we’re trying to create something that’s very, very different and so the name needs to be too.”

Jacques has achieved a lot in a career that began just 12 years ago. He kicked off as an assistant branch manager at West Bromwich agency Green & Company. After three years, he founded a short-lived lettings firm of his own. He was then recruited by Your Move to run its investor club, a specialist division that sources investment properties for landlords and then manages them on their behalf across the Midlands.

Two years later he jumped ship to Purplebricks where he headed up both its national lettings operation and its own investment club, quitting in May this year to set up Investerge.