Agents prepare for a knockout event

Training gets underway for the 'Rumble with the Agents' charity boxing event. 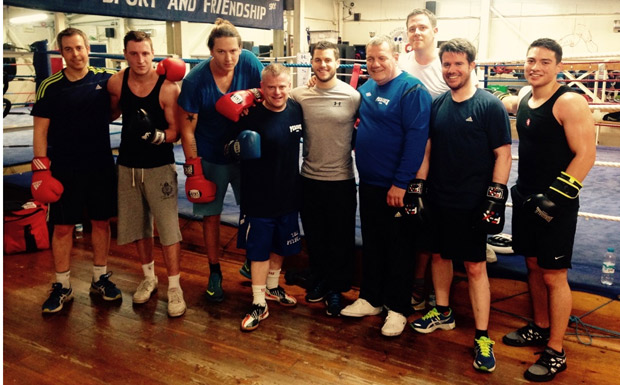 The estate and letting agents taking part in a charity white collar charity boxing event – Rumble with the Agents – met each other last week for their first group training session.

The sporting event, which took place at the world famous Peacock Gym and was filmed by Channel 5 as part of a wider documentary, offers the agents the opportunity to try their hand at a boxing whilst raising money for The Rainbow Children’s Trust, a leading organisation providing emotional and practical support to families who have a child with a life threatening or terminal illness.

Being billed as the biggest white collar boxing event ever brought to the property industry, ‘Rumble with the Agents’, which is due to take place at The Holiday Inn in Finchley Central, north London, on Thursday 21st May 2015, has so far signed up 10 fighters.

The confirmed agent boxers taking part in the event are:

Paul Shamplina (fourth from left, above), Founder of Landlord Action, which is hosting the event, is inviting two more letting and estate agents to take part. 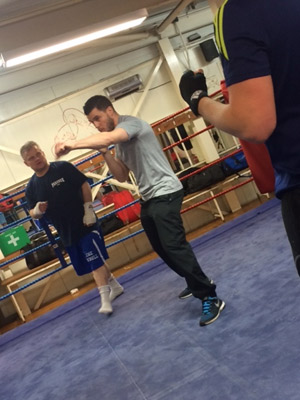 With no previous experience required, Landlord Action are looking for a total of 12 willing participants that want to get fit, learn to box and be a hero for six minutes. Punch London Boxing Gym is partnering the event to provide a fully structured and supervised boxing training programme, from a novice to ring ready by May, as well as arranging the fight matchups for the night.

The evening itself will consist of six fights – if two more fighters can be found – a sit down three-course meal with unlimited drinks, an auction, raffle, celebrity table and a disco afterwards.

“The response to this event has been fantastic, with over 200 tickets sold already,” said Shamplina. “John Conteh, a British former boxer who was world light-heavyweight boxing champion, is running our live auction and Channel 5 is filming the event to conclude a series they have been filming which follows the work of Landlord Action. It will be a great night, for an even greater cause.”

David Ronson, of The Heron Group, who will be one of the agents fighting on the night, added: “I have known Paul for years and when he gave me a call to explain about this event, I jumped at the chance to raise money for a great cause and also get fit. Training is going well and I’m looking forward to a great night.”

As the event’s official media partner, the whole team at The Negotiator Magazine would like to wish everybody taking part in Rumble with the Agents the very best of luck.