The deal is the latest in a growing number of ultra high-end deals in London's prime market as the big cash returns to the UK.

A super-luxe Victorian home near Harrods in London has changed hands between two of the richest families in the Middle East in a deal worth nearly £20m.

The five-bedroom house in Cadogan Gardens, Knightsbridge, which belonged to the billionaire Hariri family from Lebanon, has been sold to a businessman from the same country. The buyer wanted a London residence for his children.

Two members of the Hariri family – Rafic and his son Saad – are former prime ministers of Lebanon. They had owned the property, which was built in 1889, since 2014. 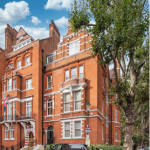 Designed by architect George Levey, the 6,500 sq ft house has five floors and a terrace. The interior, which was designed by Alberto Pinto at the family’s request, has high ceilings, ornate ceiling mouldings, classical fireplaces and a sweeping main staircase.

Beauchamp Estates sold the property for £19.75m for the Hariri family, and founding director Gary Hersham (pictured) says: “London’s super-rich buyer market has continued to be extremely buoyant during the course of the first six months of 2022.

“We have seen a flurry of deals for London properties priced over £15 million, earlier in the year many buyers were UK based, but as international flights resume we are seeing the return of wealthy international buyers as this latest Knightsbridge deal in Cadogan Gardens underlines.”

The firm’s managing director Jeremy Gee, adds: “Since the start of 2022 there have been a wave of deals for Prime London homes priced above £10 million with the lion’s share of deals done in the £15 million to £25 million price bracket.

“This year, especially as international buyers have started to return to the capital, the top five locations for super-prime deals are Knightsbridge, St John’s Wood, Kensington, Belgravia and Chelsea.”

Read our recent interview with Gary Hersham and Jeremy Gee