Over 200 new estate agency branches have opened across the Capital over the past year. 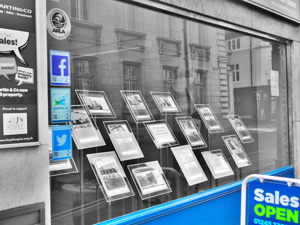 The online estate agent industry may be growing at a rapid pace but that does not mean that it is time to sound the death knell for traditional high street agents, especially in London where more than 200 new estate agency branches have opened on high streets over the past year, a new study has revealed.

Despite a drop in the number of homes for sale in the capital, there was an 8.3 per cent rise in the volume of new high street branches across the city taking the total to 2,881, up from 2,661 compared to the previous year.

The data compiled by Rightmove also revealed that there are now more than two branches for each of London’s 1,200 town centres, with all but one – Enfield – seeing an increase in the volume of estate agencies last year.

The greatest hike in the number of high street branches was witnessed in Westminster, where the total rose by 27 per cent to 228. Islington was second with a 26 per cent increase, followed by a 16 per cent hike in Hammersmith and Fulham. Perhaps it is no coincidence that property prices in these London boroughs are among the most expensive in the UK.

The rise in the volume of estate agents popping up on London’s high streets has occurred in spite a significant fall in the number of property sales transactions.

The latest Land Registry data shows London property transactions in decline, but the capital was the region with the most significant annual price increase – up 12.4 per cent year-on-year.

North London estate agent, Jeremy Leaf (left), said, “The decline in number of property transactions continues to be a worry. If people aren’t able to move in and out of the market when they want to, there will be an inevitable knock-on effect for the rest of the economy. With the high cost of moving, continued shortage of supply and affordability issues with tougher mortgage criteria, this situation looks unlikely to change any time soon.”

Alex Gosling (right), Chief Executive of HouseSimple.com, which commissioned the research, commented, “Estate agents have been making hay while the sun shines, opening more than 200 new offices in just 12 months. It’s not surprising, when just one office can make hundreds of thousands of pounds in fees in a year. London high streets are paved with property gold.

“It’s impossible to walk down a local high street in London now without passing an estate agent’s window, but Londoners will still be surprised to know there are almost 3,000 estate agents in the capital.

“It’s a staggering number, particularly when you consider most people now start their property searches online, and may never actually venture into a high street agent’s office.”