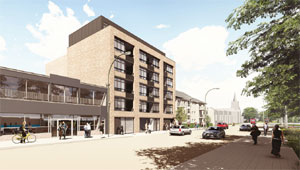 Aitch Group has acquired the former Finchley Metropolitan Police Station, for £6.2 million. The developer will submit plans for a 53 home residential scheme on the 0.47 acre site, situated at 193 Ballards Lane.

Aitch Group has also made its first move into the Build to Rent sector through the launch of new PRS arm, Vive Living, its debut 83-unit scheme at Childers Street in Deptford, South East London. The group has also announced a development pipeline of six projects in the rapidly emerging Hackney Wick and Fish Island regeneration area.

Group Marketing Director of Aitch Group, Jamie Lester, said, “We are delighted to extend our operations in the North of London, which, some time ago, we identified as an area with significant potential. We have been waiting for the next opportunity to expand in this part of the capital and our vision is to create a 53 apartments that will provide much needed homes in an increasingly exciting part of the London.”