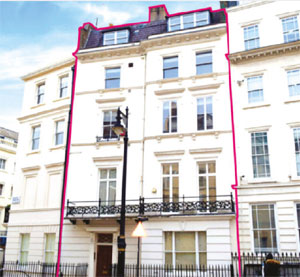 Allsop’s latest residential auction was on 28th March, the day before the original date for the UK’s proposed withdrawal from the EU. Despite turmoil in Westminster and interminable economic uncertainty, the firm delivered a solid £57m total.

Held at the Intercontinental London Park Lane, the sale had a total of 258 lots offered with 192 lots sold by the end of the day.

With realistic pricing, it is possible to achieve strong prices in the auction room.

Lot 50, which was the largest lot, was a 31 year unexpired leasehold building at 33 Charles Street, Mayfair, London. Sold on behalf of receivers, the property is arranged as five self-contained flats with a combined total of 6260 sq ft. It was occupied on disputed terms and offered subject to pre-registered bidding arrangements.

Gary Murphy, Partner and Auctioneer, Allsop said, “We were very encouraged by the outcome of this sale. We’re experiencing one of the most uncertain economic periods for decades. Yet it seems that there is still a level of resilience in our auction rooms. With realistic pricing, it’s entirely possible to generate competition and achieve strong prices. Reassuringly, we also saw a good level of post auction activity with deals being done on unsold lots before the day closed.”