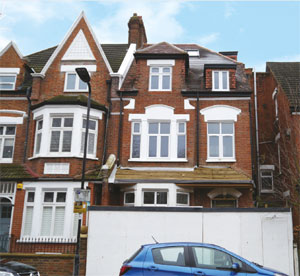 Allsop raised £54m from 200 lots, recording a strong success rate of 74 per cent, at its recent auction at the InterContinental Park Lane Hotel in London.

£10.5m was generated from high value investments sold at £1m and above.

The highest price lot, (pictured) was No 26 at £1.9m. An attractive terraced building in sought-after Chiswick, West London, with planning permission for conversion to five apartments.

Investments in London, particularly those with the potential for redevelopment received enthusiastic bidding in the room. Lot 18, a development site with planning for four, three-bedroomed houses in the London Borough of Hillingdon sold for more than £300,000 over the guide at £1.05m.

Despite uncertainty surrounding Brexit, it was apparent that buyers were keen to do business as usual.

Gary Murphy, Partner and Auctioneer at Allsop said, “This was a very important auction for us and the wider market; posting a strong result and demonstrating confidence in the residential sector for 2019 was always going to be particularly key this year. Despite uncertainty surrounding Brexit, it was apparent that buyers were keen to do business as usual. There is clearly price sensitivity across most sectors, but it is reassuring to see that bidders are reacting competitively to realistic pricing.”