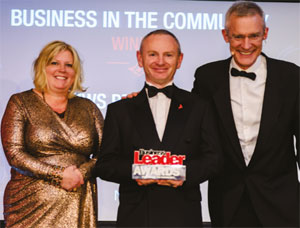 Andrews Property Group has again been recognised for its charitable work, winning the “Business in the Community Award” at the annual Business Leader Awards.

It was an innovative social housing initiative, launched as their 70th anniversary fundraising initiative, that secured success for Andrews, who launched its first home for young people leaving the care sector in April 2017. A second is due to be announced soon. David Westgate, Group Chief Executive at Andrews, said, “Andrews is unique within the property sector in that we’re owned by two charitable trusts. But this isn’t just something we say, it’s something that we live and breathe every day. It gives the entire team at Andrews a passion and enthusiasm for what they do that you don’t often see in the workplace.

“Our recently launched programme is, perhaps, the best-known aspect of our charitable work and to have it recognised in this way again is wonderful for the whole team.”