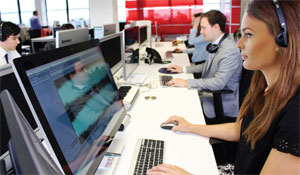 The research conducted by audio branding specialist PHMG, which audited 1,392 firms in the estate agency trade, discovered the large majority risk losing custom by subjecting customers to generic music and audio while on hold.

Typically, waiting on hold is seen as a major bugbear but 40 per cent of estate agents still leave customers listening to nothing but generic music. A further 27 per cent subject callers to beeps, while 21 per cent leave them in silence and six per cent force them to listen to ringing.

Only four per cent employ brand-consistent voice and music messaging – viewed as the best practice approach to handling calls – although this is higher than the national average of two per cent.

Mark Williamson, Sales and Marketing Director at PHMG, said, “Call handling remains a critically undervalued element of customer service and marketing. A previous study of 1,000 UK consumers found 73 per cent will not do business with a company again if their first call isn’t handled satisfactorily.

“Therefore, it is important companies do their utmost to improve the experience. Estate agents appear to be performing better than the majority of British businesses in this respect but there is still work to be done in providing an experience that keeps callers engaged and entertained.”