Over £3.16 billion worth of residential property was sold under the hammer in 2015 – says EIG. 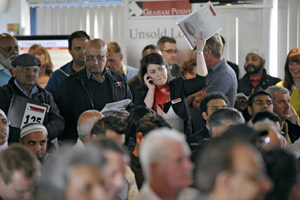 Increasing property prices helped to boost auction revenues across the UK in 2015 in spite of a decline in the volume of lots offered and sold, new market analysis has revealed.

The Essential Information Group (EIG) has published its residential auction market review for 2015, which provides a detailed account of the trends witnessed in the market, and it shows a 3.4 per cent year-on-year rise in auction revenues last year, led by the South East, up 23 per cent, South West up 14 per cent and Scotland, up 34 per cent.

“Since 2010, when the amount raised fell to a ten year low of £2.22 billion, revenues have been heading skywards and last year more than £3.16 billion worth of residential property was sold under the hammer,” said David Sandeman (left), Managing Director at EIG. “It is widely expected that house prices will continue to rise (in 2016) albeit at a slower rate than has been seen in recent years.”

There was an increase in revenues despite a 4.5 per cent year-on-year fall in the number of lots sold last year.

Notwithstanding the marginal decline in auction instructions, EIG report that there remains a very healthy appetite amongst buyers for keenly prices auction lots, as demonstrated by the 77.6 per cent sale rate achieved last year. This represents a 1.4 per cent rise on the 76.5 per cent achieved in 2014 and extends the run of rates in the mid-to-high seventies to five consecutive years.

Mr Sandeman added. “Following several years of sustained growth which culminated in a record number of auction sales in 2014, it is clear that the industry has momentarily slowed down. Possible factors that might have affected the market include the uncertainty that surrounded the result of the General Election in the early half of last year, and a strengthening private treaty market.

“In 2013 the auction market also experienced a slight decline in numbers, but bounced back strongly in the following year, so one hopes that the market responds in an equally impressive manner in 2016.”