Industry react angrily to expected 'crowd pleaser' that will 'push rents up'.

It's a bombshell we saw coming, but where was the consultation?

What do you think of the letting fees ban? Painful? Pointless? 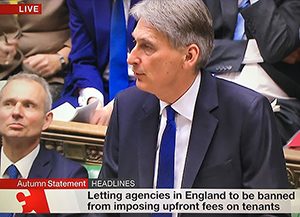 As expected Chancellor of the Exchequer Philip Hammond has announced this lunchtime in his Autumn Statement that letting fees for tenants are to be banned outright “to improve competition in the private rental market and give renters greater clarity and control over what they will pay,” he said.

David Cox, MD of ARLA, disagrees: “A ban on letting agent fees is a draconian measure, and will have a profoundly negative impact on the rental market. It will be the fourth assault on the sector in just over a year, and do little to help cash-poor renters save enough to get on the housing ladder. This decision is a crowd-pleaser, which will not help renters in the long-term. All of the implications need to be taken into account.

A ban on letting agent fees is a draconian measure, and will have a profoundly negative impact on the rental market.’

“Most letting agents do not profit from fees. Our research shows that the average fee charged by ARLA licenced agents is £202 per tenant, which we think is fair, reasonable and far from exploitative for the service tenants receive.”

The ban that been on the cards for months and according to Isobel Thomson (pictured, right), chief executive of the National Approved Letting Scheme (NALS) is an “easy political win” that the industry has been‘sleep-walking’ into.

NALS last week convened a meeting of key industry and consumer organisations to begin drawing together a Fair Fees Forum, a move that is put into doubt by the Chancellor’s confirmation that fees are to be banned outright, although civil servants are said to be supportive of the Forum’s work.

“Let me be absolutely clear,” says Isobel. “NALS does not believe this is the right way to go for agents, landlords or tenants and we will continue to communicate this on your behalf to decision-makers.”

But many agents believe an outright ban would be counter-productive and as it would raise rents as agents seek to recoup lost tenant fees from landlords, further damaging the private rental market.

Nick Leeming, chairman of Jackson-Stops & Staff (pictured, left) says: “A better solution would have been to create a more competitive fee environment and ensuring that landlords are not further discouraged from the market.”

Glynis Frew, MD of Hunters Property plc (pictured, below) says: “We are very disappointed by [this] announcement. An outright ban would have unintended consequences on the very people the government wants to protect perhaps financially or even in terms of property safety.

“Agents perform both a service and a paralegal role when assisting tenants to move home. In our national tenant survey we commissioned earlier this year, 80% of respondents said safety of the property was important to them.

“An agent plays an important role in ensuring this; 85% said the cost of rent was important and 75% of respondents said they did not want rents to increase to cover the cost of banning lettings fees. Unfortunately, it is very likely rents will increase in response to these changes.”

Paul Smith, CEO of Haart (pictured, left), puts a number of the likely rent rises: “The cost of administration such as references and inventories that tenant fees would have previously covered are now likely to be passed onto the tenant through their rent,” he says.

“We estimate that rents will on average increase by £21.25 per month, which is an extra £255 a year, as a direct result of this change – with tenants in London likely to be much worse off.”

Paul says Haart’s data reveals that the number landlords registering to buy has fallen by 25% annually across the UK, and by 60% in London.

“We’re creating a time bomb for Generation Rent by pushing landlords out of the market, as well as undermining housebuilders’ pipelines by cutting demand.

“The government should concentrate on getting the market moving again, not penalising landlords, and we cannot wait until the situation on the ground reaches a crisis point.”

Not all agents are against banning tenant fees. Rob Ellice, CEO of online-only agent easyproperty (pictured, right) says he welcomes the Chancellor’s announcement.

“By removing these costs, a fairer playing field will be created for the UK’s 4.3 million private renters,” he says.

“Any sensible agency won’t pass on the charges to landlords, due to competition in the sector, so we don’t foresee rent rises as there is no need to add the fees to rents. Having the Government step in to abolish these fees is another example that the industry cannot self-regulate and be fair to consumers.”

It's a bombshell we saw coming, but where was the consultation?

What do you think of the letting fees ban? Painful? Pointless?