Average rents fell last month for the first time for eight years, the HomeLet Rental Index reveals, as economic uncertainties to take their toll across the property market.

The average rent on a new tenancy in May was £901 a month, 0.3 per cent down on the £904 recorded during the same month of last year; the first time since December 2009 that the average UK rent has fallen on an annualised basis.

The UK-wide decline was led by Greater London, where rents in May were, on average, 3.0 per cent down on the same month last year, slipping to £1,502 from £1,519. However, rents also fell in Yorkshire & Humberside, the South-East of England, Scotland and the North-East of England.

HomeLet data marks a significant moment for the PRS. While rental price inflation has been slowing since last summer, when it peaked at 4.7 per cent, this is the first time since 2009 that it has slipped into negative territory across the UK as a whole. The rental market is performing similarly to the housing market, where Nationwide Building Society has tracked UK house prices falling in each of the past three months. Against a backdrop of nervousness about the prospects for the UK economy, with inflation rising and growth slowing, landlords appear to have become increasingly wary of raising rents.

Many landlords face difficult questions: costs are set to increase, particularly for landlords affected by cuts to tax relief, their ability to charge higher rents is constrained. For tenants, falling rents may appear to represent good news. However, if landlords withdraw from the PRS because returns are less attractive, the imbalance between the supply and demand of rental homes may worsen; rents will climb steadily again, as a shortage of property hits home.

The potential impact could be toughest in areas of the UK where rents accelerated most rapidly during the first half of last year, and which have subsequently seen the biggest slowdown. 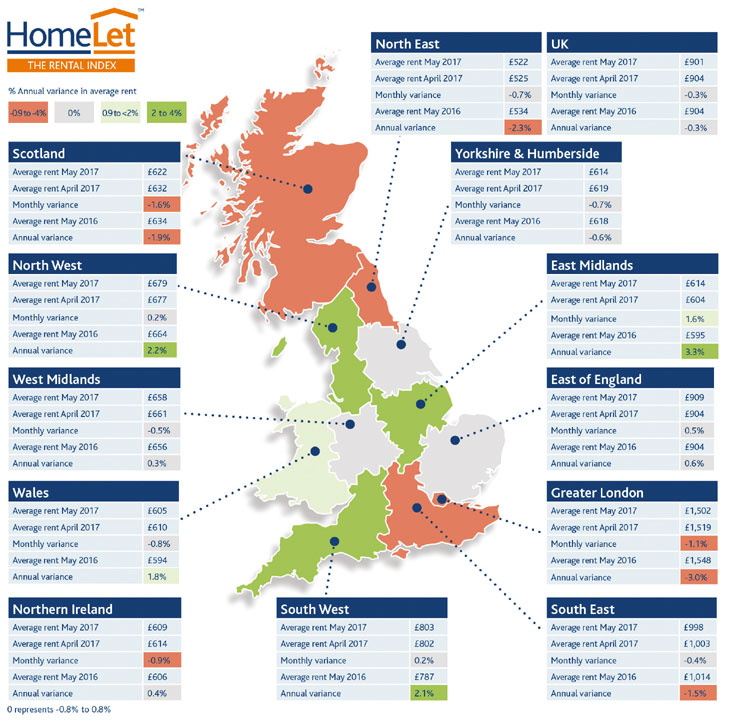