Belvoir has acquired Newton Fallowell, adding 31 branches to its network 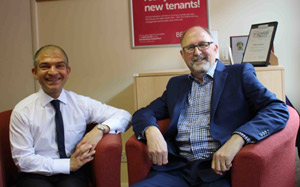 Belvoir has added a further 31 offices to its network by acquiring Newton Fallowell in the East Midlands.

The deal to buy Newton Fallowell, one of the largest estate agents in the East Midlands, is subject to completion later this month but does look set to go-ahead.

Dorian Gonsalves (left of picture), Belvoir’s Director of Commercial and Franchising, described the pending acquisition of Newton Fallowell, which has its head office in Grantham, plus a further 30 franchised offices in various locations around the UK, as a “golden strategic opportunity” for his company.

The additional Newton Fallowell offices will bring the total in the Belvoir network to 193, which will put Belvoir firmly into the top five largest lettings and estate agency chains in the country, according to Gonsalves.

He commented, “When Belvoir floated on the London Stock Exchange in 2012 we made a clear promise to our network and our investors that we would reach 200 offices before the end of 2016. With further acquisitions in the pipeline, this puts us well ahead of our target.

“The opportunity for Belvoir to acquire Newton Fallowell represented a clear strategic fit with our acquisition policy, and there are obvious complementary strengths in lettings and estate agency. The acquisition also demonstrates Belvoir’s commitment to significantly increasing its market presence and continuing to develop the network with multi-brand franchises.”

Mark Newton (right of picture), Chief Executive of Newton Fallowell, who founded the company in 1999, has decided to stay on in his role for the next two years, and possibly beyond, as will Finance Director Andrew Derry and Marketing and IT Director David Newton.

Speaking of the acquisition, Newton said, “I am delighted, as Newton Fallowell and Belvoir both have their Central Offices in Grantham, and have both been in business for a similar number of years, growing incrementally alongside each other, and in many ways I would say that this is a business match that was made in heaven.

“I will be remaining with the business, which will continue to be run by the same people in a similar manner, but will have the added strength and support of Belvoir as its parent company. This will have a very positive impact on our franchise owners who can only benefit from being part of such a large and successful company. Similarly, our strength and expertise in estate agency, which has been carefully developed over many years, can only help to enhance brand Belvoir, so this is a very exciting milestone for the business.”