Sign in or Sign up
The essential site for residential agents
Home » Features » Branding buildings, building brands
previous next
Marketing

Bankside has long been a tourist magnet but few people lived there. Now, by changing perceptions of the local area more homes are selling, says Paul Silvester, MD at Identity. 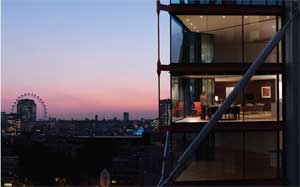 In an increasingly brand-literate world, the contrived and shallow are rapidly discarded in favour of the authentic, credible and sophisticated. Over recent years, property marketing has begun to embrace this new reality, using branding to do more than put a stake in the ground and support sales.

One notable example of our work that demonstrates this is NEO Bankside, which used branding to change perceptions of an area; it provides a valuable insight to this new brand-literate world.

Bankside – a place to visit, not to live…

Bankside has long been a magnet for tourists, from day trippers to visitors from all corners of the globe drawn by the history of Shakespeare’s Globe Theatre, the Tate Modern and the buzz of street theatre along the riverfront.

But for many years, very few people lived there. In the 1980s the Coin Street Community had cleared the frontage to the river and built pleasant housing and retail around Gabriel’s Wharf, but for a long time Coin Street remained an anomaly. It was only when joint venture partners Native Land and Grosvenor Estates arrived with their hugely ambitious plans for NEO Bankside that it all began to change.

NEO Bankside is a Richard Rogers designed development right next to Tate Modern, with penthouses that currently change hands for upward of £4m. It is the type of property traditionally only found in the most exclusive parts of the West End, but it is right on the river and just a short stroll from the City.

Consumers are ever less willing to accept what they are told and to follow the herd.”

Place the apartments in a more traditionally desirable area and there would be wealthy buyers queuing up to buy them. The challenge we faced was to shift their perception of Bankside and persuade them that this was an equally desirable place to live.

We began with the name. ‘NEO’ provided a clear reference to art and including ‘Bankside’ not only stated our confidence in the desirability of the location, but also highlighted its proximity to the City.

From there, a striking teaser ad campaign featured a young woman taking a candlelit bath on the Millennium Bridge – a moment of private intimacy in a place visited by millions of tourists. Already, people were beginning to reassess the area.

An eight minute film featuring Kevin Spacey, who has been Artistic Director at the Old Vic for the last 11 years, and renowned architect Richard Rogers, introduced the development and daringly promoted Bankside as adjunct to NEO. The national press highlighted proximity to the Tate Modern (‘Move in Next Door to Warhol, Dali and Picasso’) and the City (‘A Short Walk from the City. A Million Miles from Work’).

This approach was unexpected, challenging and remarkably successful. Our campaign helped secure rapid, high value sales for most of the 200 properties – values have doubled in just three years – and it also played a key part in the transformed perception of the entire area.

There are many more developments now springing up in the area. Many of these are from major players such as Berkeley Group and are the sort of investments those firms only make when an area is a proven performer. Indeed, the numbers speak for themselves: these developments are commanding prices that are comparable to those for the most exclusive West End neighbourhoods.

RIPE Rewards for the forward-thinking

In London and many of our major cities the desirable locations and properties have already been developed. So, in the months and years ahead, developers will need to work hard, not only building brands that emphasise the strengths of their properties, but going even further to fundamentally shift perceptions.

They will need to do this in a world that is shrinking, with new media platforms emerging every few months, and where consumers are ever less willing to accept what they are told and to follow the herd.

For those of us tasked with property marketing, this means we need to stay open minded, responsive and fresh. Above all, we need to create brands that are rooted in the real and tangible but which have the inspirational and aspirational qualities that everyone, from shared ownership first timer to penthouse billionaire, looks for when buying a place to call home.