It’s a long way from a small lettings agency next to a glass replacement business in Bridgwater, Somerset, to Britney Spears’ former home in California.

But letting agent Emily Evans has made the journey after being given a slot to present a ‘through the keyhole’ segment of yesterday’s ITV breakfast show Good Morning Britain.

The 30-year-old started out as a letting agent when she was 20 years old and later started her own business, Emily Evans Lettings, in 2014, while also building up a local property portfolio.

But since then she has re-cast herself as a property expert, media commentator and TV presenter appearing in The Sun and Metro newspapers and a Sky channel called Property TV.

This exposure and a professional agent have helped her achieve the pinnacle of her media career so far; yesterday’s appearance on Good Morning Britain. Evans was flown to Los Angeles to visit the former Los Angeles home of ‘Baby One More Time’ pop star Britney Spears, a long way from her former offices in Bridgwater (pictured, below). 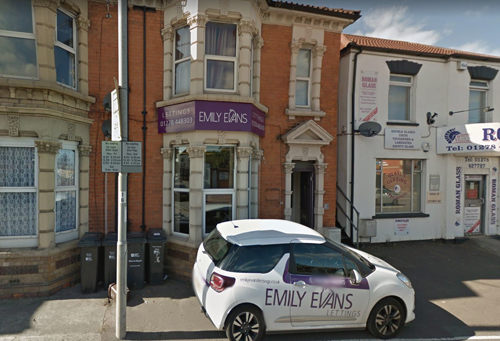 During the three-and-a-half minute slot Evans marvels at the size of Britney’s old Los Angeles mansion complete with chandeliers including a look at her bedroom and swimming pool.

The house, which is on the market for $7.5 million, is famed because it featured in a documentary which is credited with reviving Spears’ career after her much-documented mental health challenges.