Brighton and Hove letting agents who use To Let boards to advertise properties within the city may soon have to reduce the size of their signs and only mount them flush on property walls if plans for a voluntary scheme are voted through today.

The council is considering the scheme which will operate in the largely student Lewes Road corridor area of the city and is backed by The Brighton & Hove Estate Agents Association, which says it is “supportive of better management of residential letting agents boards and will continue to work with [council] officers to this end”.

Brighton and Hove’s scheme will run for a year and be voluntary, but if unsuccessful the council says it will return to the Secretary of State to ask for a Regulation 7 Direction order to enforce stricter policing of To Let boards.

In 2010 the council asked for 17 zones mostly in Conservation Areas to be considered for a Regulation 7 Direction and of these 12 were allowed, two partially allowed and three turned down. 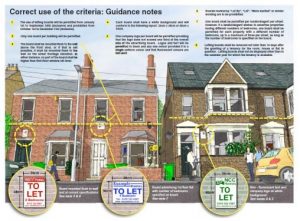 If the scheme gets the go-ahead then, following several months of consultation, it is likely to start in May 2017.

Documentation from council officers (pictured) suggests they are going to adopt measures similar to those introduced in Nottingham and Leeds. These require agents to affix their boards, which must be no more than 34cm x 48cm either portrait or landscape, flush to a property’s front wall but not above the level of first floor windows.

In Nottingham agents are only allowed to use one company logo per board, only one board is allowed per property, boards must have a white background and the boards can only say ‘To let’ and not ‘Let’ ‘Let by’ or ‘More properties wanted’.