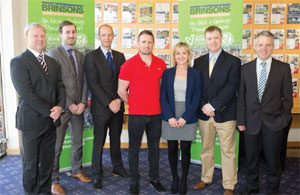 Wales-based agency, Brinsons is set for another year of support to Velindre Cancer Centre.

Brinsons is pledging a donation from every house sold through its three offices – in Caerphilly, Cowbridge, and Cardiff – over the forthcoming year. This will be run alongside a number of fundraising events supported by a Rightmove grant and held over the next year. These include Brinsons Director, Trevor Isaac, tackling the ‘Ride the Rockies’ Challenge in Canada this September.

Andrew Morris, Head of Fundraising at Velindre, said, “We have been very fortunate to benefit from the superb support of Trevor Isaac and the Brinsons team for a number of years, but this commitment takes their involvement to a whole new level.”

Trevor Isaac, Director at Brinsons, is already an Ambassador for the charity and has raised £20,000. His fundraising expeditions have included cycle rides along the East and West Coast of America, a trek up Mount Kilimanjaro, and a hike around Patagonia to commemorate the 150th anniversary of the first Welsh settlers.