Sign in or Sign up
The essential site for residential agents
Home » Charity » Bruton Knowles raises £6,000 for Charity 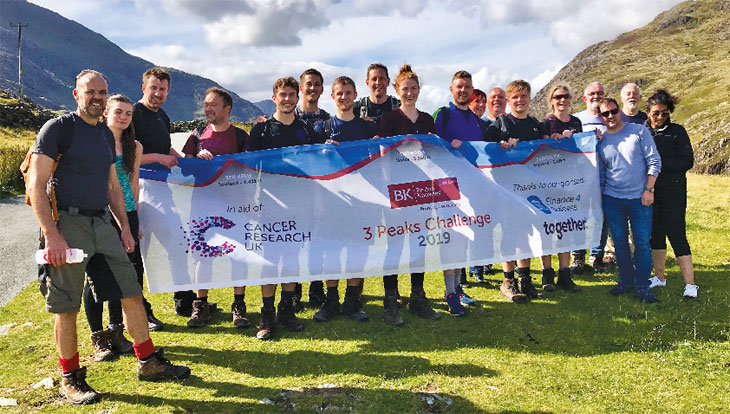 Bruton Knowles raised over £6,000 for Cancer Research UK, by climbing three mountains in 24 hours. 12 members of staff from the Birmingham office took on the National Three Peaks Challenge, aiming to raise £2,000 – the biggest charity challenge they had ever participated in – and the dedicated team trebled its target.

They climbed to the highest peaks of Scotland (Ben Nevis), England (Scafell Pike) and Wales (Snowdon). Ben Nevis took four hours and 50 minutes, Scafell Pike was four hours. With three hours and 45 minutes left for Snowdon, the team fought to complete the challenge, with less than seven minutes to spare.

The activity is part of Bruton Knowles’ two-year campaign to raise £30,000 for Cancer Research UK and staff have collected £15,000 so far. Each Bruton Knowles office has a Charity Champion, co-ordinating charitable initiatives and events.

May Dudley, Charity Champion in the Birmingham office, said, “This was the biggest and most gruelling challenge that anyone at Bruton Knowles has taken on. While it was testing and very difficult at times, we all worked as a team to support and help each other, willing us all on to succeed.

“I am delighted that we have raised so much money for Cancer Research UK. Everyone at Bruton Knowles has been, or will know someone who has been affected by cancer, and the money raised will help the charity take another step in fighting this horrible disease.”