Philip Hammond has today announced a raft of housing measures, the biggest of which will abolish Stamp Duty for 80% of first time buyers. 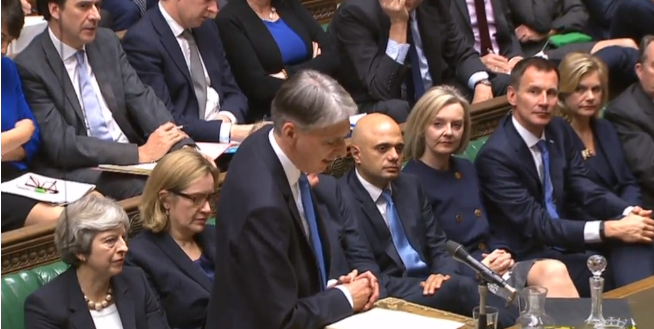 Chancellor Philip Hammond has made several key housing announcements that will impact both the sales and lettings sectors of industry and which he said was part of a £44 billion package.

The most important of these is that Stamp Duty is to be abolished for first time buyers and, in more expensive areas of the UK such as London, the first £300,000 of a property’s sale value exempted from Stamp Duty, if priced less than £500,000.

This, the chancellor said, would remove any Stamp Duty obligations for 80% of first time buyers.

Other measures included enabling councils to charge a 100% council tax premium on empty properties – which may force many landlords to either rent out their properties or sell them.

“Penalising empty home owners with a 100% council tax premium is unlikely to really be a deterrent for people who are likely to be high net worth,” says Nick Leeming, Chairman of Jackson-Stops.

“If they don’t need the rent, this penalty probably won’t bother them either.”

The Chancellor announced a building target of 300,000 new homes per year by the mid 2020s – a variation of a policy already announced.

Philip Hammond also revealed that the government will look to encourage longer tenancies by incentivising landlords to offer them – although no concrete plans were revealed.

“From our research, we find that the majority of tenants are just as likely as their landlords to prefer the flexibility afforded by six-month break clauses,” says Will Handley, Managing Director of recently-launched online lettings platform Homerenter (pictured, left).

“So, whilst long-term tenancies can be of real financial benefit and security to both parties, we don’t see a one-size-fits-all approach working.”

There was good news for letting agents worried about the introduction of Universal Credit, which the government is to spend £1.5 billion on to make payment fairer and quicker, Hammond said.

This includes removing the seven-day waiting period which, many agents had been worrying, would lead to mass evictions of tenants on Universal Credit who were then unable to pay their rent.

The issue has been much debated recently. A letting agent in Grimsby last week revealed that he had sent out hundreds of pre-emptive letters to his tenants ahead of the Universal Credit roll-out due to take place in the town on December 13th.

One surprise initiative in the Budget is a £2 million Fintech competition to help tenant creditworthiness by developing ideas to help them add their rent to their credit histories.

“Rather than wasting £2m on a competition, the solution already exists,” says Sheraz Dar, CEO of CreditLadder.

“We are already helping thousands of tenants have their on-time rental payments taken into account.”

“Being a regular commentator on the need for Stamp Duty to be reformed, it is encouraging to see that the Chancellor has announced that stamp duty will be abolished for first time buyers on property purchases of up to £300,000 and for higher value areas such as London, on the first £300,000 of a property’s price.

“It doesn’t, however, go far enough in my view.

“Stamp Duty is one of the biggest, if not THE biggest, obstacles in getting our housing market really moving and I, along with many others, would have welcomed the removal, or at least reduction, of the surcharge on second properties.”

“The Chancellor has pledged to make the dream of home ownership a reality for all generations, and scrapping SDLT for first-time buyers will undoubtedly be welcomed whole-heartedly by those struggling to get onto the property ladder.

“However, Britain needs to build, and while a new funding package for UK property development is a stride in the right direction, it will only help tackle our housing crisis if it is invested in the right places.

The UK has been scraping the bottom of the barrel for affordable housing stock over recent years and it is vital that increased investment is used wisely to tackle such depleted supply.”

“I do feel the Chancellor has missed a trick by failing to reduce stamp duty levels across the board.

“Stamp duty levels have acted as a brake across the entire market preventing the likes of downsizers and second-steppers from making their moves.

“The housing market must be viewed as a whole, and comprehensive stamp duty reform would have increased overall fluidity to the benefit of all buyers.”

“First-time-buyers should think about acting quickly to take advantage of this stamp duty ban, before the extra demand it creates pushes up prices and starts to eat away at the extra cash this Stamp Duty exemption will free up.

“The Government has already put buy-to-let landlords on the back foot with its 3% Stamp Duty surcharge, so this extra advantage of no stamp duty gives first-time-buyers an extra edge.”

“The Chancellor is sensibly trying to secure the youth vote with housing measures aimed directly at them.

“The £300,000 cut off for stamp duty is a positive measure, one which should help to give our first time buyers a leg up on to the property ladder.

“Choosing to build is as always welcomed, however building 300,000 new homes every year by the mid 2020’s seems optimistic.”

“Families in cities like London have been hung out to dry by Philip Hammond in today’s Budget, as he doesn’t do nearly enough to solve the capital’s stagnant market.

“By only introducing cuts in Stamp Duty for properties under £500,000, the vast majority of London buyers will remain heavily penalised, where a modest family home can easily go for over one million pounds.

“The Chancellor failed to provide any solution for those already on the property ladder and reliant on quick sales to downsize or move into their dream home. Far more still needs to be done to aid affordability and loosen up the market.”

“The announcement today from the Government to abolish stamp duty for FTBs will have a positive impact on the market.

It’s a smart move to ensure the dream of homeownership for young people can become a reality and will help buyers across the UK, including London and the South East where property prices are higher.

“We do however need to realise that this move will increase the demand for FTB properties and if we don’t have the supply it will push prices up. We have seen this in areas where Help to Buy is offered, as it attracts a great deal of interest from FTBs.”