Leaders hits 100 agencies, The Romans Group has completed the purchase of a Guildford-based estate agents, Connells Group has acquired another letting business and Belvoir has launched four new offices. 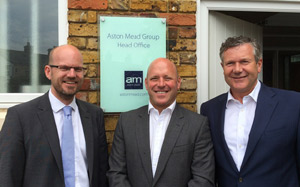 Leaders has acquired Home Counties estate agency Aston Mead in a deal which brings it additional branches in two new areas, taking it past the 100 branch milestone.

Aston Mead trades from Epsom, Walton-on-Thames, Weybridge and Woking where Leaders will be merging the business with its existing, well established branches; as well as from Sunningdale and Chertsey which are new areas for Leaders and will take the firm to just over 100 branches.

Leaders passed another significant milestone recently when it welcomed its 1000th member of staff following the acquisition of IMS Letting in Derby in June.

Matthew Light (left of the main picture), Leaders’ former finance director who recently took up the new role of acquisitions director, said, “We extend a very warm welcome to all our new staff and clients who join us from Aston Mead, and a special welcome to our new team in Sunningdale, which is our 100th branch.The Romans Group has acquired Meldrum Salter Edgley in Guildford and Connells Group has snapped up another lettings business a – Cartwrights in Stafford.

Meanwhile, Romans’ decision to buy Meldrum Salter Edgley fits in with the firm’s expansion strategy, and follows on from the acquisition of James Griffin in Bracknell in May.

Expanding its portfolio of estate and letting agencies has been high on the agenda for the Romans Group with nine successful acquisitions already under its belt since 2013.

Business will continue as usual for Meldrum Salter Edgley in Guildford with the name being retained alongside Romans’, and the team offering professional and expert advice on sales, lettings, and surveying.

Michael Ginsberg (left), Senior Partner of Meldrum Salter Edgley, said, “It was always going to be a difficult decision on whether or not to sell the business and inevitably one feels great trepidation about the process and the potential pitfalls. In the end, I need not have worried as the purchasers, the Romans Group, conducted matters in a straightforward and transparent manner.”

Meanwhile, the Connells Group said that the successful completion of Cartwrights in Stafford was in line with the company’s expansion plans to double the size of it lettings network by the end of this year. This latest addition means that Connells has opened more than 100 lettings branches in the last 18 months.

Mike Rowley (right), Acquisitions Director at the Connells Group, commented, “This strategic acquisition sits in a location that perfectly complements our existing lettings branch network. It allows us to strengthen our business as well as increase our regional spread.”

Finally, Belvoir has launched four new offices, which takes the company ever closer to its goal of 200 offices by the end of 2016.

Two offices in Bracknell and Hemel Hempstead are already open for business, whilst Belvoir Daventry and Belvoir York are due to open in this month.

“Opening four new Belvoir offices in prime locations has been a fantastic start to 2015 and brings us one step closer as a network to achieving our aim of having 200 outlets by 2016,” said Belvoir’s Director of Commercial and Franchising, Dorian Gonsalves (left).