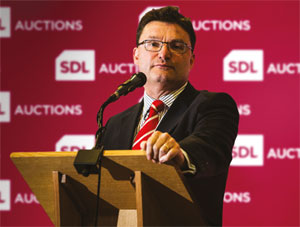 Rory Daly, CEO, SDL Auctions, is pleased that the Housing Secretary is examining all potential development land in public ownership but urged him to focus on the smaller plots of land currently sitting in local authority ownership.

Mr Daly said, “Over the past 15 years, we have auctioned many such sites for local authorities and many of these now have owner-occupiers living in houses built on them.

“Smaller sites are snapped up at auction by the smaller developers – who cannot afford to land-bank but must turn a profit as soon as possible for cashflow reasons.

“This means that previously derelict or underused land is now in profitable use, having created work for contractors, and been bought by local people who are now paying local council tax.

“It really is a Win-Win circle that can only benefit the local community,”

“Dominic Raab is the 16th housing minister in 20 years, in a role which ironically has become something of a revolving door in government.

“I hope he and Sajid Javid can pull together to really make a difference this time.

“It is not just local authorities that are sitting on sites. A lot of government departments have public sector land that can be turned into homes.”