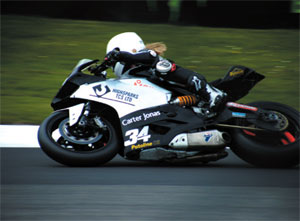 Stephanie Waddelow, a Lettings Negotiator at Carter Jonas, Cambridge, likes a bit of action when the office closes, so the agency is supporting her in her speedy pursuit of success in the Ducati TriOptions class, riding the Highsparks Motorsport/ Carter Jonas Ducati.

Steph started racing minimotos at the age of 11, progressed to the MRO Superteen championship on the Aprilia 125, then the Triumph Triple Challenge series.

This year her first race meeting was at Silverstone alongside the British Superbikes, as well as competing in the Post Classic 125 class at CRMC onboard the Gary Bryant 1984 Honda 125, with podium finishes in five of the seven races to date this season.

Stephanie says that the racing this year would not have been possible without her generous sponsors, “Highsparks Motorsport provide the Ducati 899 and Carter Jonas funds my tyres on the Ducati 899 for the season, while Gary Bryant, who owns it, pays the running costs for the 125.”