Sign in or Sign up
The essential site for residential agents
Home » Charity » Catfest: agents and suppliers join the stars at ‘property’s Glastonbury’ to raise £52,607

Catfest: agents and suppliers join the stars at ‘property’s Glastonbury’ to raise £52,607 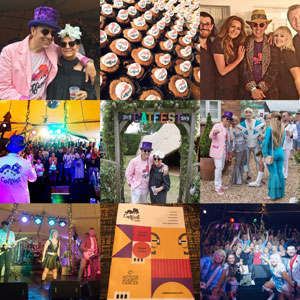 Catfest is the property industry’s version of Glastonbury, presented by the well known trainer and consultant Julian O’Dell and his wife Cat, who held their annual fundraising music festival on July 13th in their garden near Milton Keynes.

Their twelve months of planning and hard work culminated in a brilliant day raising a new record of £52,607 for the charity Action Against Cancer.

Julian said, “I’m so proud of Catfest – this was the fifth event – widely regarded as the best ever. The weather was perfect and the feedback we’ve had from attendees saying what a great time they had makes the effort all worthwhile.

“Obviously the main objective is to raise money so to beat our record was a nice bonus!”

The O’Dells’ chosen charity Action Against Cancer helps to fund cutting edge research to save lives. Cat has been living with cancer for over nine years and recognises that research creates hope for victims of the disease. 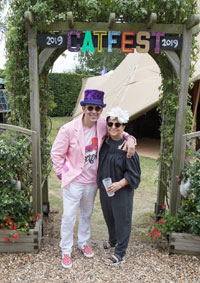 The revenues were boosted by auction lots including an England rugby shirt signed by Martin Johnson and holiday packages in London and Norfolk. A collection of Julian’s drawings of music stars, many signed by the subjects, fetched almost £2,500. A selection of guitars, signed by the great artists including Brian May, Mark Knopfler, Robert Fripp, Steve Harley, and Midge Ure, boosted the total.

Julian said, “Cat and I cannot thank enough all those people who helped before, during and after Catfest, our suppliers, bands, sponsors, attendees, raffle ticket buyers, auction bidders, my pictures by and so on. We are thrilled to have beaten last year’s record.”

“Each year we deliberate over whether to “do a Glastonbury” and have a fallow year to give us and the garden a break, but when we see all the smiles on the day, read all the fabulous messages from those who attended and loved it, when we sit and calculate the massive amount of money we are passing to charity, we think to heck with it, let’s go again.

“We have new and existing sponsors confirmed for next year but welcome more. Numerous bands and singers are offering their services, volunteers are queuing up, which is great, but we always need help in terms of some standout auction lots.

“I am particularly keen to be connected with anyone in the music world who can help me get some more renowned musicians to sign our fundraiser guitars. I drive the guitars anywhere in the country to get the deed done. Any help is appreciated!”