Cautious landlords seeking to balance tenant affordability with the need to generate returns are easing back on the rate at which they raise rents, HomeLet’s latest research shows. Across the UK, rents on new tenancies were just three per cent higher in October than in the same month of last year.

With the average cost of renting a home now £902 a month, October was the second successive month in which rents rose by an average of only three per cent; in March rental inflation was 4.5 per cent a year.

Landlords are aware that their properties must be affordable, as their own costs rise – the higher Stamp Duty rates on buy-to-let purchases and forthcoming reduction in tax relief on buy-to-let mortgage interest – they have so far been reluctant to ask tenants to pay significantly more.

This caution may reflect anxiety about the uncertain economic outlook, with the Bank of England forecasting lower economic growth and higher inflation. Landlords are also aware that wage settlements have generally lagged inflation over the past two or three years, squeezing tenants’ disposable income.

The restraint shown by landlords has encouraged tenants to remain in their properties for longer – now averaging 28 months, HomeLet’s data reveals. This may reflect an increasing desire amongst landlords to retain reliable tenants.

The slowing pace of rental market inflation is particularly marked in areas of the UK where rents were previously rising fastest. In London, rents rose at an annual rate of 2.5 per cent in October, down from more than 7 per cent a year ago; in the South-East region, rents rose 2.7 per cent last month, down from above 4.3 per cent in the final quarter of 2015. Nevertheless, the longterm outlook for the rental market is positive, with private rented property set to play an increasingly important role in the UK’s housing market as house price affordability deteriorates and the supply of rental property remains relatively constrained. Over time, rents are likely to continue to rise. 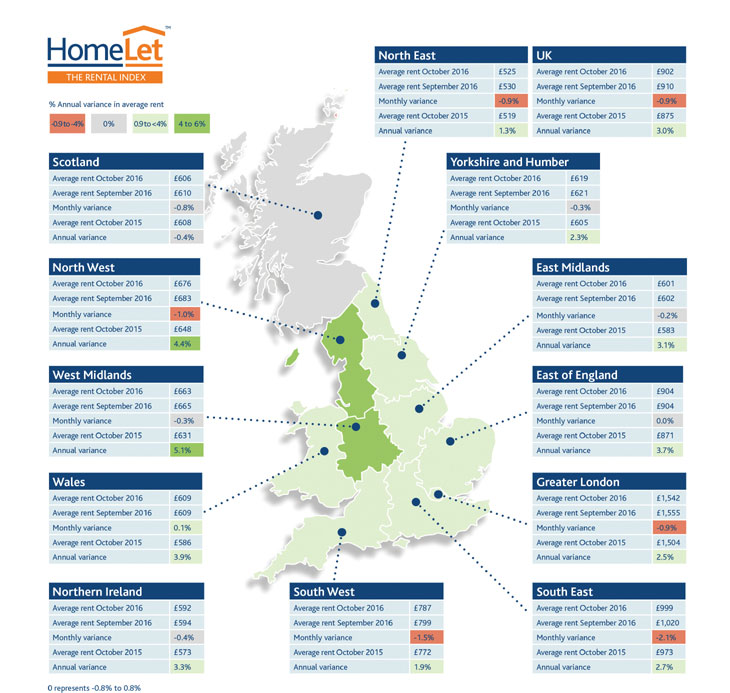