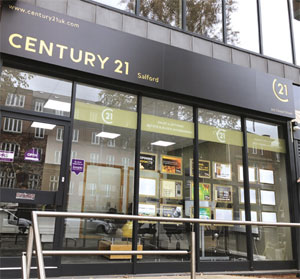 Century 21 UK celebrated the opening of its new branch in Salford, near Manchester Arndale Centre, with an opening event in November.

The new franchise on Chapel Street will be headed up by Abubakr Sehri, who has lived in Manchester for 17 years after moving to the UK in 2001.

Abubakr says, “I have owned a franchise of the convenience retailer Londis for the past 13 years, but decided to venture into property five or six years ago. I went into the buy-to-let industry and I now own four properties – this is where my interest in property began.

“My aim is to bring the area of Salford together and offer my business expertise to local residents. I enjoy providing excellent service, so the concept of becoming a franchisee really attracted me as I will be able to focus all my attention and dedication into one branch.”

Chris Summers, head of sales and development for Century 21 UK added, “The opening of our new branch in Salford solidifies the immense growth of Century 21 UK in the past few months, and is a great way to bring the year to its close.”