Hammond says he wants to 'get Britain building' again 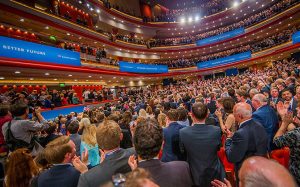 As part of the government’s action to tackle the housing deficit and ensure everyone has a secure place to live, the Communities Secretary and the Chancellor said that they are determined to take action and get more homes built.

Chancellor Philip Hammond set out the plan to launch a £3 billion Home Building Fund to help to build more than 25,000 new homes during this Parliament and up to 200,000 in the longer term. Note that this isn’t a donation to building homes, the fund will provide loans for small and medium enterprise builders, custom builders, offsite construction and essential infrastructure.

Sajid Javid said, “This Government is getting on with the job of building a country that works for everyone. We’ve made great progress fixing the broken housing market we inherited but now is the time to go further. We want to ensure everyone has a safe and secure place to live and that means we’ve got to build more homes. It is only by building more houses that we will alleviate the financial burden on those who are struggling to manage.”

“From today, builders and investors just need to give us a call to start discussing funding for new homes. Our dedicated team will also provide expert ongoing support to new entrants to the sector and those companies proposing innovative solutions to speed up house building.”

It all sounds very promising but will it happen? The Conservatives cite the previous Labour regime as the problem, stating that between June 2008 and June 2009 only 75,000 new homes were started, the lowest level of housebuilding in peacetime since the 1920s. (DCLG, House Building: September quarter 2013 England, 21 November 2013).

Since 2010, when the Conservatives formed their coalition with the Liberal Democrats (how long ago does that seem?) the government says that by reforming the planning system and increasing investment in housing “we have turned around the housing market with over 700,000 net additional homes delivered between April 2010 and March 2015.” (DCLG, Net Supply of Housing, 12 November 2015)

But, says the Government, there’s much more to do – and they are right. In the 20 years from 1969 to 1989 over 4.5 million homes were built in England. Between 1992 and 2012, fewer than 2.9 million were completed. There is a longstanding gap between housing supply and demand which has led to worsening affordability. In over 40 per cent of local authorities, median house prices are over 10 times median incomes.

Mark Hodgkinson says that the £3 billion Home Building Fund will:

Let’s hope he is right!