Chris Wood of Penzance-based PDQ Estates has thrown down the gauntlet to hybrid agent Purplebricks to see who can sell the most homes. 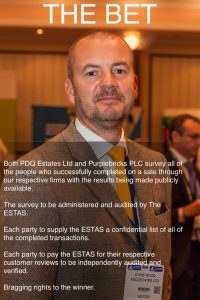 “I spoke to Simon Brown at the ESTAs who said he was very happy to do it and that it would all be above board,” says Chris.

“Everyone thinks I’m anti Purplebricks, but I’m not,” says Chris. “I’ve got nothing against the hybrid concept – I helped develop a very similar system for Tesco when I worked there as a consultant – and I think the Purplebricks model is an excellent one.”

Chris says his main problem with both Purplebricks and several traditional high street agents too is the way that properties are listed on the portals and how agent review websites work.

His challenge has been retweeted numerous times including by Top 150 UK law firm and conveyancing solicitor Trethowans. It tweeted that ‘it won’t be Purplebricks who win. Always avoid online estate agents, sorry, but that’s my client feedback’.

Purplebricks has so far ignored Chris’s gauntlet and instead concentrated on its Valentines twitter campaign, which urges users planning to propose marriage at home to submit their ideas and win funding for their ‘purple proposal’.

But on the phone, a Purplebricks spokesperson told The Negotiator: “On a daily basis we compete up and down the country with traditional and non-traditional agents and, with over 9,000 properties on sale and thousands of happy customers, we are winning in the only competition that matters.”

PDQ Estates won a national newspaper plaudit as Britain’s ‘best small estate agent’ in 2013 and has three branches which currently lists 13 properties for sale, and five to rent. Purplebricks on the other hand has 9,625 properties for sale and 392 properties to let.