Student lets specialists Clever Student Lets expands into general sales and lettings with a rebrand on the back of the property boom in the south west of England. 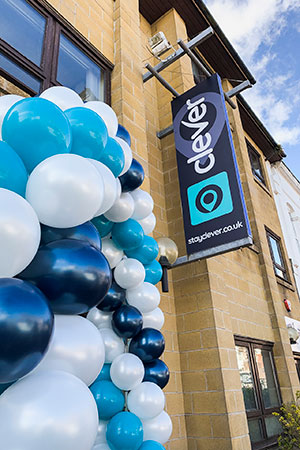 Inspired by rocketing local prices, student accommodation specialists Clever Student Lets, have moved into general sales and lettings in the Plymouth area. According to The Halifax, the average sale price of a home in Plymouth during the past 12 months was a new record high of £278,123, which is 10.8% higher than the previous year, with property values increasing by 0.5% month-on-month.

Clever Student Lets – which has now been simply rebranded to ‘Clever’ – has a strong reputation as the go-to place for student accommodation, placing over 23,000 learners over the past 12 years. To lead the expansion, Clever has appointed a new CEO, Derek Richardson, who has a wealth of experience from his previous roles running large residential sales and lettings agencies across South Wales and the West.

Commenting on the development, he said, “I had no hesitation at all taking this role with Clever to reposition them in an incredibly buoyant market here in Plymouth. Even though official figures show a 10% rise in 2021, we think the true figure this year is actually closer to 12% – in the PL3 postcode alone, properties have increased by 15%.

“Plymouth and the surrounding areas saw one of the busiest markets in living memory in 2021 thanks to a range of factors such as the Stamp Duty holiday, people needing more room or a better environment to work from home, or just those people moving to this great city for a different way of life post-pandemic.

“This was also reflected in the lettings sector, where people were still seeing property as a good long-term investment. This was complemented by a strong demand from those wanting to rent,” he said. He expects the ‘race for space’ which has dominated the property market for the past 20 months to carry on throughout 2022.

“A vivid example of the way house hunters’ priorities have changed is shown in the keywords they are using to search. According to Rightmove, ‘annexe’ is one of the most-searched terms – this was an almost non-existent search term back in 2018 and 2019 – with ‘garage’ being another, as buyers look for that extra space to transform into a home office, gym, or spare bedroom.

“Many economists and property experts work on the basis of an 18-year property cycle, which suggests that we are about to enter a period of sustained growth over the next four to five years.

“This theory coupled with strong economic conditions and restored confidence in the UK property market should encourage investment and underpin an active and stable property market for 2022,” he said.