Sign in or Sign up
The essential site for residential agents
Home » Features » Is a company car still worth it?
previous next
Regulation & Law

Is a company car still worth it?

Status symbol and convenient, but these days the company car, says Maurice Hardy, offers no free ride for employees or employers. 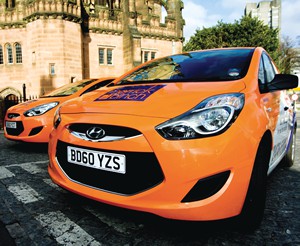 Few things used to cause more excitement among employees than the offer of a company car.

It may also have come with a company parking space, too, and depending on where you work, the combination of car and space could signal you had really arrived.

But these days the thought of personal taxation penalties – the meaning behind the P11D figure that appears in car prices lists where brands are frequently chosen for company use – can rather sour the aspirations of the impecunious employee who suddenly finds the company wheels are not quite a free ride.

In his March Budget, George Osborne also announced there would be a rise in the amount of tax for the majority of company cars in 2017/18 and 2018/19 while the Budget in 2016 will see a review of incentives for ultra low emissions vehicles.

Talk to senior personnel responsible for company fleets and you hear all sorts of horror stories about the state of cars when employees jump ship. After giving notice, some apparently spend the rest of the month gathering sweet and takeaway wrappers so they can fill every available space.

Company car provision needs clear parameters from the outset. A retired fleet manager who ran hundreds of cars said users had to clean their cars every week without fail and he made spot checks. Two revelations of an unwashed car meant no more car. The employee either found his own transport or, like the car, joined the great unwashed. Pernickety? Maybe, but the car represents your business, particularly if it is liveried, so it needs to sparkle.

The big decisions now are not absolutely about price, more about whether to buy or to lease. Buying may tie up capital, leasing spreads the cost and gives a predictable monthly outlay that can cover the cost of the car itself or everything from servicing to tyres and annual road tax. But it may be better if you arrange your own finance, depending on how much of a competitive interest rate you can negotiate.

One drawback of leasing is that when staff leave you still have the car. There could be penalties for handing it back and a replacement employee may not be keen to take on someone else’s well-worn two-year-old hack. One agency director told the tale of the time he had five cars on his driveway after a clearout of staff, all of them on lease. He no longer provides staff cars, hardy surprising, and buys his own outright.

While the thought of the car may be the stuff of dreams for staff, the choice of wheels has to be one that works for the company, too.

It may not matter in some firms just how many seats the car has – a staffer who works solo may only need a two-seater car. But in estate agency there are frequently people to carry and at least four seats must be the rule.

A Porsche coupe or convertible may have more appeal than a Peugeot hatchback but the Peugeot has more use than the Porsche. Besides, you can always dangle the keys to the latest 208 GTi in front of staff to incentivise them.

There are no such things as bad cars any more – the real Eastern European junk has been consigned to the past while the South Koreans make cars, often in Europe, that carry five year unlimited miles or seven year 100,000 miles warranties. What’s not to like, apart perhaps from not perceiving a Hyundai or Kia to have the same badge value as a Volkswagen or Audi?

Probably more important than badge is space – and the number of doors. Some of the cars favoured by estate agents – Minis, Fiat 500s – leave the clients who travel in the rear seats wishing they possessed body origami skills that far exceed anything a Japanese master could achieve with paper.

Ease of access does not mean choosing cars that are boring to drive or to look at or, indeed, lacking the style to promote your business when properly liveried. But if you do livery them, having drivers who use them like roller skates on crowded urban roads will win your business few friends.

City car: You want something with five doors that doesn’t smack of poverty model, so maybe not a Dacia. But its parent, Renault, has the Clio, always a popular choice with staff, while Fiat’s Panda makes more sense than its 500. VW Group has the Seat / Skoda / VW trio with the Mii, Citygo, and up!, all of which can have five doors. Citroen, meanwhile, has the C1 and there could be some good deals around as a new model launches in July. It’s certainly one to watch. With cars of this size, be aware that sometimes there are only four seat belts, restricting their usefulness.

Supermini: There’s a reason the Ford Fiesta is the UK’s best-selling car – it’s good at what it does. There’s plenty of style, plenty of choice, and it looks like a mini Aston Martin. What’s not to like? Familiar fare comes in the shape of the VW Polo or Vauxhall Corsa but both Hyundai (i20) and Kia (Picanto) are here, too. There’s always the Mini, but everyone has those. They are too big outside for what they give inside although the Mark 3 range promises bigger still. If you want big inside, try the Citroen C3.

C segment: This is the trade moniker for the Ford Focus sector – the Ford of course is always near the top of the sales charts. Its main opponents are the VW Golf or Vauxhall Astra but these days a Skoda Rapid may do the trick. If traffic cops can drive Skodas, so can negotiators! Hyundai (i30) and Kia (cee’d) are there, too and if you do big mileages the

Hyundai is a no-brainer with its unlimited mileage warranty. The Toyota Auris is British built and has a five year warranty but the image is hardly right-on.

D segment: The executive stuff, where a Ford Mondeo has all the glitz but an Audi, BMW, or Mercedes shows all the glamour. There’s a new Mercedes C Class due in showrooms and the BMW 3 Series is regularly in the Top 10 UK sellers list, maybe a good reason why Audis are getting more popular. An Audi A4 is a good choice and its front wheel drive prevents lairy, tail out sliding on roundabouts (often as a result of driver error rather than prowess).

Crossovers: Not so long ago, nobody knew what these were. They look like a 4×4, drive like a car, and sell in huge quantities, especially the Nissan Qashqai and its smaller sibling, the Juke. Both are re-launching right now and are made in the UK if you are coming over all patriotic. Honda’s CRV is also UK-made but there’s the Ford Kuga, available with a system that opens the tailgate if you wave your foot under the bumper, and several other choices.

MPVs: These used to be big, now they can also be small. Ford’s B-MAX is clever with its sliding doors and huge side opening so there are no access problems. The company also makes the C-MAX, Grand C-MAX, S-MAX (my personal favourite as I’ve just leased my second new one) and Galaxy. Citroen’s Grand C4 Picasso is 2014 MPV category winner in the UK Car of the Year awards and is a stylish, competent performer. If five seats are enough, the low- fat C4 Picasso is ideal. VW, Seat, Mazda, and Vauxhall are all here, too. These cars are a great way to get plenty of people to viewings, especially the seven seat models.

Executive: Here we are into BMW 5 Series, Audi A6, Mercedes E Class territory, along with a wide variety of the upmarket 4x4s which may not give quite the image you want. Several, frankly, are more chintzy than velour drapes but some people love them. If you want 4×4, Skoda’s Superb offers it along with the likes of the Audi allroad, an A6 estate on steroids. If you are in country agency, the Audi may give you a better presence than the Skoda – more Downton than downtown. The Land Rover Discovery is also acceptable, although it looks chunkier than a Transit van and you need climbing skills that are more real than social to stay clean as you get in.

Green: This is a moot point. You get lots of talk about zero emissions but electric cars just mean you can’t see who is choking on your fumes unless you live near a power station. They also have limited range although you can get what’s called a range extender, like the Vauxhall Ampera, which can be plugged into the mains but also has an engine to generate current. Hybrids (and plug-in hybrids that link to the mains) are also up there and have seemingly fantastic fuel consumption figures that never deliver but fully exploit the test rules. They used to be great for avoiding the congestion charge but if you think Boris is bonkers think again – these days many don’t pass go without coughing up the cash.

Maurice Hardy has worked in estate agency PR for 24 years – and as a motoring writer for 42 years. maurice.hardy@ultimatepr.co.uk