International Monthly Lettings Index shows that 12% of rented homes are at the highest level in eight years. 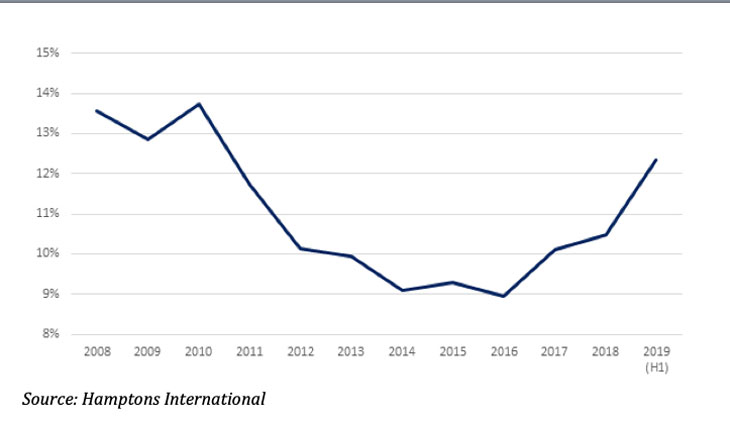 In the first half of 2019, 12% of homes were let by a company landlord, reaching the highest level since 2011 and up from 9% in 2015 (before the tax changes for non-company landlords were announced).

Hamptons International estimates that company landlords now own 641,480 homes in Great Britain this year, 42% more than in 2015 and that London landlords are most likely to own a buy-to-let using a company structure (13%).

The average cost of a new let in the UK rose to £986 pcm in June, a 3.1% year-on-year increase driven by rising rents in the South.

Aneisha Beveridge, Head of Research at Hamptons International, said, “More than one in ten rental properties are now owned by private companies, an indication that the sector continues to professionalise. Increasing taxation for private landlords combined with the growth of the build to rent sector has meant that more companies are letting homes than at any time since our records began.

“London, where landlords tend to have higher levels of debt and often the most to gain from corporate ownership, has the largest proportion of homes let by a company.  However, it’s not always more profitable to put a buy-to-let into a company as other associated costs come into play.”