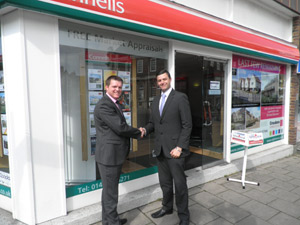 Connells plan to open as many as 75 new lettings branches in 2015, as part of the firm’s ambitious expansion plans, having already enjoyed an exceptional year of growth in 2014.

Connells Group’s multi-million pound lettings expansion programme continued to gain momentum last year after achieving a total of 68 new lettings branch openings and a growing number of lettings acquisitions in what continues to be one of the largest lettings expansion projects ever undertaken by a UK agency.

“2014 was an exceptional year of growth for the Connells lettings business and 2015 shows no sign of slowing down,” said Stephen Nation (left), the Group’s Lettings Managing Director. “We had a record number of new branch openings, both in existing and new locations, achieved key acquisitions with a good geographical spread and appointed Mark Chatterton as Corporate Lettings Director to lead our growth. Our aim for 2015 is to continue this rapid expansion plan with a further 75 new lettings branches added to our local branch network.”

Testimony to the Group’s already strong presence in the lettings market, Connells Group Lettings recorded a 20 per cent rise in the number of homes to let coming onto the market and a 25 per cent rise increase in the number of tenancies agreed in 2014 compared to 2013. Demand continues to increase for rental property across all areas of the UK and this ambitious growth programme will allow Connells to offer its industry leading proposition to a much wider section of the market.

Recent lettings acquisitions that have taken place around the UK include Platinum lettings in Crawley, Harcourt Estates in South Leicestershire and Peter Allen in Wales.

As well as the Connells brand, the Group operates under a variety of local trading names including Barnard Marcus, William H Brown and Fox & Sons. “Our local lettings offices offer a market-leading proposition to tenants, landlords and investors in the locations in which we operate. We are looking forward to extending access to this as part of our current expansion,” Mr Nation added.

The Connells Group is currently open to new opportunities to acquire lettings business across the UK so is urging owners to get in touch if they would like to discuss this further.