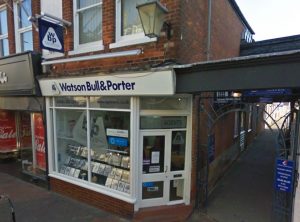 The Countrywide closures saga continues after one of its agents on the Isle of Wight became the latest to have branches closed and staff redeployed or put through a consultation process.

Watson Bull & Porter, which currently has eight branches on the island and had already closed its Shanklin office before the latest announcement, says it is to close a further two branches, possibly by the end of the year.

The company, which has been trading for over 150 years, would not reveal which two offices would face closure as their staff are going through a consultation process before they close their doors.

Countrywide released a statement to local media saying that “as always, we remain committed to working with colleagues to ensure that those who wish to be redeployed are supported in doing so”.

The company also said that it had ‘updated’ all its staff last week on changes to its retail and London businesses about the “next phase of change which includes streamlining our branch footprint and strengthening our regional management structure”.

The Isle of Wight closures are part of a move by Countrywide to slim down its operations which has included the amalgamation of several London agencies into the John D Wood brand.

In September Countrywide revealed that is was due to close 59 branches, or approximately 5% of its total branch network during 2016 and 2017.

The closures are part of the company’s Building our Future strategy implemented by CEO Alison Platt in October 2015, which included the creation of several senior roles. This has included three divisional managing directors, a retail commercial director, retail programme director and retail performance director as well as 12 regional retail directors, plus four new managing director roles within its London business.