Share price has now plunged 88% over the past three years and is continuing to drop despite the recent departure of CEO Alison Platt. 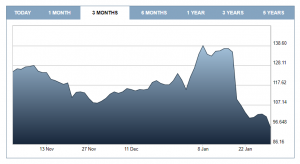 The Countrywide share price freefall continued yesterday plunging by 10.5% to 84.9p per share, an all-time low for the company (see graph, right).

Its share price had rallied slightly in recent days following the departure of CEO Alison Platt, but investor confidence in the future of the company and the overall property market appears to be waning again despite Chairman Peter Long recently stating that he would stay on until the company’s problems had been sorted out, and the promotion of Paul Creffield to Group Operations Director.

The sudden drop in shares is likely to be a result of major shareholders offloading their exposure to the company’s shares and recent figures from the Land Registry revealing a 21% drop in year-on-year property transactions during 2017.

Following the departure of Alison Platt, Peter Long’s salary was doubled from £180,000 to £360,000 as ‘golden handcuffs’ to incentivise the long-serving industry stalwart to remain with the company, while Platt’s severance deal is yet to be announced, although it likely to run into the hundreds of thousands.

Online rival Purplebricks, which first listed its shares on the AIM stock exchange in December 2015, has a share value just under £5 and a market cap of £1.35 billion.