Sign in or Sign up
The essential site for residential agents
Home » Features » Can builders dare to be different?
previous next
Housing Market

Can builders dare to be different?

Who is building interesting, modern homes for the mass market? Andrea Kirkby reviews developments that break the mould and win awards. 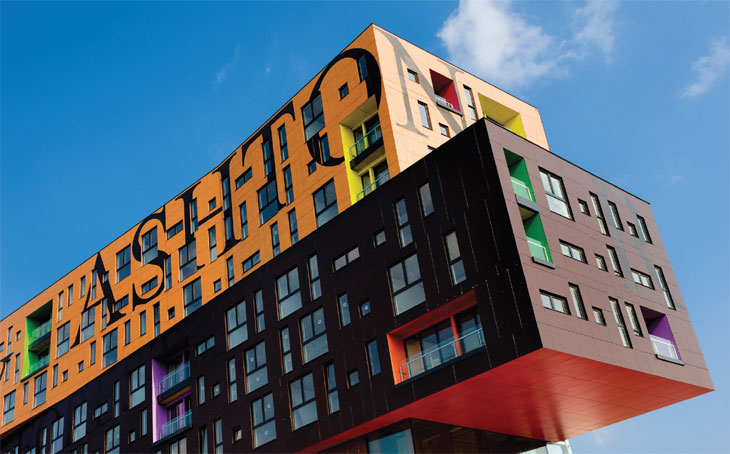 Many of us would rather buy a period house than a new one; Georgian terraces and Victorian rectories are always in favour. Perhaps that’s because many new builds are boring – little brick boxes with no architectural merit, stuck on estates with no variety and no urban centre. While commercial design dares to dream up buildings like the Cheesegrater and the Walkie-Talkie and public buildings like the London City Hall assert themselves bravely on the cityscape, new homes seem to have progressed little in the last two decades.

But there are good new homes being created, as a look at the various awards for housing design shows. The RIBA Awards have only twice seen an overall winner from the housing category. One, Astley Castle, was a one-off commission from Landmark Trust to create a new house inside an ancient ruin, but the other was a major housing development, Accordia, in Cambridge. 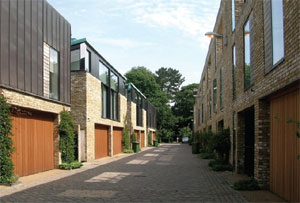 Clean modern and, somehow, classic too.

Accordia is imaginative, modern high-density housing. It delivers extra space by using first and second floor terraces rather than gardens for each house, as well as internal courtyards, and strips of common land. The developers, Countryside Properties, created an overall aesthetic approach but then allowed individual architects to create different building styles and features within the guidelines. That delivers an environment that feels diverse and intimate, but with common features – huge windows, textured brick walls, wooden detailing such as decking and weatherboarding, and a distinctively modern take on the terraced house.

However, Accordia is an exception to the rule. Even within the housing section of the RIBA Awards, the prize is usually won by a private client commission, rather than a development.

For design, housing associations and councils lead the pack. Catalyst Housing Group appears several times in shortlists. Its Portobello Square development was particularly popular with the judges; it’s a contemporary reinterpretation of the Georgian terrace, using the same rhythm and elevation as the old terraces but with a very modern articulation.

The reinterpretation of old architectural forms through a modern aesthetic is a feature that turns up regularly in the awards, and some of the most interesting developments are those that extend old buildings with a very modern, but complementary, addition. St Mary at Eton, in Hackney, grips the Victorian red brick church in a vice of higher, newer buildings, but makes the group cohere through the continuation of the patterned brickwork of the original on to the new extensions. Thornsett, a specialised family-owned firm, did the job; the church has been refurbished for its parish using the funds freed up by the residential development – an unusual approach that suits a smaller builder.

Once you take councils, housing associations, and London out of the pack, there are very few contenders in the awards. Take out apartment buildings, and look for

award-winning developments of family houses, there seem to be even fewer – except for the ‘new country house’ category. That may be fascinating – it’s the sort of thing you see on Grand Designs – but it’s not particularly useful to those trying to provide or sell housing for the mass market.

At Crest Nicholson’s Bath Riverside the aesthetics were planned to blend with the city’s classical heritage.

There are bright spots though. Crest Nicholson’s name regularly crops up in shortlists, and it had a big winner with its Bath Riverside development. Like Countryside with Accordia, Crest Nicholson formulated a design code, and then employed different architects on different areas of the site. The aesthetics were planned to blend with the city’s existing classical heritage; Bath stone was used as a key material, and curved forms reflect the shape of the Royal Crescent and The Circus. Thought was also given to creating a whole environment, not just buildings, with the creation of riverside walks and landscaping for the project.

That reflects a major trend towards the creation of complete communities rather than just housing. Larger developments now are adding business space, shops, community centres and even schools; residents now want the services where they live, and want leisure facilities and play areas, too. With larger developments, just selling the show home is no longer enough, the whole package needs to be a good one.

Regeneration and refurbishment often seem to bring out the best in architects and developers, as in the case of St Mary of Eton, and that shows up strongly in the results of design competition. Perhaps that’s simply because standard designs aren’t easily shoehorned into a historic context, so developers are forced to start from scratch; it may also be because planners are more rigorous in considering architectural quality where a historic building is concerned (St Mary of Eton is Grade II* listed). Such developments also sell well, perhaps because the setting appeals emotionally while the living space is modern and functional.

PegasusLife’s One Bayshill Road, Cheltenham, is another HDA-shortlisted development that takes a modern approach to the classical terrace. It takes the regularity of the fenestration in the classical villas to either side as its inspiration and creates a white grid-like frontage for the modern infill; it’s not pastiche, but takes the values and materials of the older building and reinterprets them for the modern age. PegasusLife has received recognition for its reworking the retirement property concept, with great attention to detail ranging from the architectural (materials, style) to the practical (storage space).

Some of the bigger names in housebuilding don’t show up often in the awards (Barratt is an exception; it does quite well), but there’s a bunch of newer, smaller outfits that score well. Urban Splash, which started out in loft style apartments, is now building inner city houses, using the traditional terraced approach but with a novel twist. By using timber pods which are made in the factory and assembled on site, it’s able to offer customers the opportunity to design their own houses, whether that’s an open plan layout or a more traditional divided space. The hoUSe concept has great appeal to urban professionals, as Chairman Tom Bloxham explains, the sort of people who might have bought one of Urban Splash’s flats a decade back, but now want more space, though without moving to the suburbs.

At a couple of hundred thousand a house, these aren’t multi-million properties – they’re aimed squarely at the mass market, making great design available at a reasonable price.

Ask developers and their agents and it seems people really do want modern designs. Oakgrove Village has seen strong demand, with four out of seven properties in the first phase of Ouzel Island reserved on the first day. Demand is high in other areas of Milton Keynes, and prices are buoyant, too. Meanwhile Urban Splash sold all 43 ‘hoUSe’ units at its New Islington development, even though only 14 are built. Urban Splash may be selling to a niche market, but it’s a good niche and what the design-conscious buy today, regular buyers may be queuing up for tomorrow.

A recent RIBA exhibition, At Home in Britain: Designing the House of Tomorrow, suggested that the most radical design mode of all could be ‘Back to the Future.’ Architects took their inspiration from the most successful past designs of British architecture: the medieval Oxbridge college, the Georgian terrace, the mansion, the country cottage, and used them as a springboard to design housing for modern needs. The results were interesting, particularly the radical introduction of shared spaces.

For instance, vPPR created terraces that look conventional from the outside, but have had the party walls opened up to create shared spaces that can be used for co-working or play areas. Mechanoo’s apartment block took its ideas from the Oxford quadrangle and the great country house, and made long galleries, courtyards and halls for residents to share, with a wide range of private spaces from the loft and studio to the larger maisonette.

Will customers buy the idea of sharing? Some certainly will, according to The Collective – or at least, they’ll rent it, as they are doing at its Old Oak co-living development, for £250 a week. Buying might be a bit harder to sell, especially as valuing properties with extensive shared space is tricky.

There’s some really great design out there at the moment. A lot of it is at the top of the market, the million pound plus architect’s houses, and a lot of it is in the public sector, with councils like Islington and Greenwich, as well as go-ahead housing associations like Genesis, Peabody and Catalyst, coming up with brave modern designs. But while the private homebuyer is less well served – particularly when it comes to houses rather than flats – there are some innovative developers out there, and they’re setting the trend for the next decade.