Letting agents should urge landlords to be more wary of weed farms in their investment properties, following a rise in the number of recorded cases. 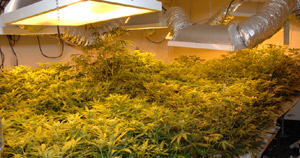 Letting agents and property managers are being reminded to remain attentive when viewing or inspecting rental properties in order to weed out tenants that may be growing cannabis in properties belong to their clients, after a new report revealed that the number of cannabis seizures in rented homes soared by up to 195 per cent in 2014.

Police raids resulted in no fewer than 59,002 plants being seized in London, which was more than any other part of the country. Birmingham had the second worst record with West Midlands police confiscating 52,218 plants, while 33,547 plants were removed from homes in Greater Manchester.

Although the overall volume of seizures fell by 10 per cent between 2013 and 2014, a third of police forces have seen an increase over the year, of 40 per cent on average. West Mercia in the Midlands leads the pack with a 195 per cent increase in confiscations, followed by Cambridgeshire at 110 per cent and then Wiltshire at 75 per cent.

Direct Line for Business is now urging landlords, or anybody managing a property on their behalf, to lookout for obvious signs that their properties are being used as secret cannabis farms with clues including blacked out windows, powerful lights on day and night, a pungent smell and low-level hanging equipment.

Direct Line claim that farms can not only cause significant damage to properties, but could also potentially void their insurance policy. The company even reports that it has seen claims for damaged ceilings and walls which have been knocked through, severe water damage and fires, all due to this criminal activity.

In addition to the financial costs, landlords could also face legal action themselves if it is proved that they were aware of these criminal activities or have received money or proceeds from illegal drug activity.

Jane Guaschi (left), Business Manager at Direct Line for Business said: “The consequences of a cannabis farm on a landlord’s property can be financially catastrophic. Landlords should check to see if their insurance policy covers them for malicious damage as it’s not just the structural damage that could have insurance implications, it’s the financial headache of the clean-up that will hurt the landlord’s back pocket. What’s more, landlords could face loss of rent and the stress of the legal wrangling during periods of repair or eviction.”