Show homes are furnished to attract potential buyers, with carefully curated rooms, but, says Joanne Christie, it works for rentals and sales of pre-owned homes too. 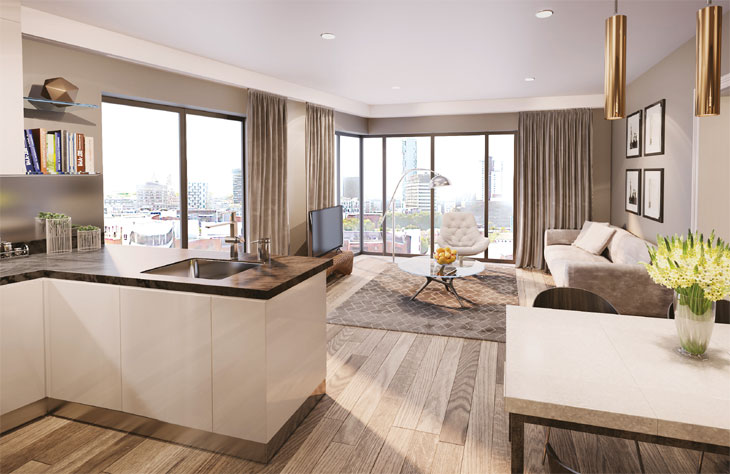 Rather than the afterthought it may once have been, especially in rental properties, furnishing is now critical in buyers’ and renters’ minds. There are a number of factors that have led to its increasing importance; the fact many renters expect to rent for longer, the difficult sales market, the desire to have an ‘Instagrammable’ home and the recent emergence of build to rent, to name a few.

THE RISE OF THE RENTER

The most recent English Housing Survey, released last July for the period 2015-16, revealed that the number of households living in private rented homes doubled since 2000 to 4.5 million. The average length of tenancy is now 4.3 years, with 10 per cent of those surveyed having lived in their current home for 10 years.

With tenants staying longer in rental accommodation, rented properties are increasingly being seen as homes rather than temporary stopgaps and tenants are becoming more discerning about what’s in them.

“Gone are the days when tenants will just rent any property with any furniture in it. Landlords used to use rental properties as an excuse to get rid of their old furniture. You just can’t do that now,” says Andrew Clark, Managing Director at furniture supplier David Phillips.

James Cameron, Director of the property management company, Vesper Homes, says furniture is now sometimes even more important than the property itself, “Tenants have become more picky when it comes to furniture choices and will even rent another flat rather than go with their first choice if the furniture isn’t what they want.” 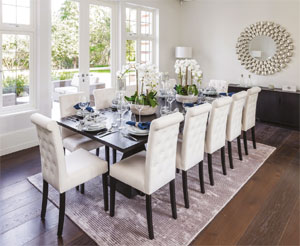 Another factor driving tenants’ higher expectations is the relatively recent emergence of competition from build-to-rent schemes, where developers build blocks solely for private rentals. Many of these developments let out properties that rival showhomes, albeit often at a higher cost than other properties in the same area.

The behere Hayes development, for example, has partnered with Habitat to provide a higher standard of furniture than is typical in the buy-to-let sector. Matt Finch, Asset Manager at Be Living, says the thinking behind it is to encourage longer tenancies. “We’re investing in our developments for the long term so that our residents can make it their home for the long term. Contemporary furniture that stays looking good is just one of the ways we can attract and retain our residents.”

Many other developers had similar thinking to Be Living in the early stages of build to rent, however, more recently a new trend has emerged whereby rather than offering nice furniture as an inclusion, developers are providing units unfurnished and then partnering with furniture companies to offer tenants the opportunity to rent the items of their choice.

Dressing is key in 3D walkthroughs – there’s no hiding. Some people rent furniture just for the the video and more companies are seeing the benefits. Tim Swaddle, Roomservice by Cort.

Tim Swaddle, Head of Residential at furniture rental provider Roomservice by CORT, which is working with a number of developers in the north on such a basis, says, “Many of the properties had furnished schemes from the start – it might have been OK for the first tenants but when the second tenant comes along, they may want to change it to suit their needs.”

Housing association L&Q has adopted a similar strategy with some of its developments, says Lukman Ahmed, PRS and Commercial Director. “Furniture packages are available at a number of our schemes. Our customers have commented that our flexible offering is preferable to moving into an already furnished home (where they may find old tired furniture that just doesn’t suit their style) – allowing them to use quality new furniture, without the significant upfront cost of buying furniture, or the hassle of selling or moving furniture should they choose to relocate.”

Interestingly, it has seen success with the idea even in London, a market where the vast majority of properties are provided furnished — Ahmed says almost 45 per cent of its tenants in the Nine Elms development are renting furniture through L&Q.

Furniture rental is, however, much more common in the US and whether it will become widespread in the UK remains to be seen.

Another factor adding to the competition for tenants is the tough sales market, says Francesca Fox, Lettings Manager at luxury London agent Beauchamp Estates. “The wide range of instructions currently available to let in prime central London, as many owners have decided to switch sale properties to lettings (at least short term), has created a highly competitive market.

Currently, I have two almost identical properties, one is dressed and the other empty. The furnished one has received double the level of interest. Francesca Fox, Beauchamp Estates.

“Those that stand out are the ones that are best dressed: careful choice of furniture and furnishings can give an otherwise less favourable property the edge over a technically better alternative, securing tenants more quickly. I currently have two almost identical properties, where one is dressed and the other empty. The furnished property has received double the level of interest.”

Of course, not everyone who is struggling to sell at the top end of the market is switching to letting, but if they are struggling to sell, better furnishings may still be the answer, says David Phillips’ Clark. “At the top end – prime and super prime – it is slowing down. That is where home staging and dress to sell comes into it because whereas an empty property might have just flown off the shelf before, owners are now needing to enhance it and help it appeal.”

Typically sales agents will advise clients with languishing properties to consider staging and may even refer them to a company, but thus far the idea of agents actually becoming involved in the process hasn’t really caught on in the UK in the same way it has in other countries such as the US and Australia.

However, new agent Ivywell, which opened at the beginning of this year, is included a staging service as part of its standard sales process. “The style and type of furniture in a home can drastically impact not just price achieved but also the speed of sale.

“On the whole, property marketing in the UK is archaic in comparison to many countries. In Sweden, Denmark and America, ‘staging’ and the use of neural, stylish furniture and accessories is a key part of the marketing process. The UK is only just cottoning on,” says Ivywell co-founder Zac Horner. 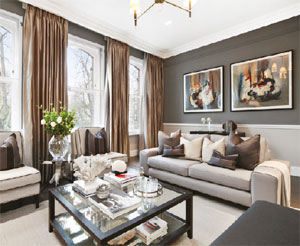 With the agency located in Chelsea, one may assume it’s a high-end tactic, but Horner says it works equally well across all budgets.

“One of our directors recently sold his property for 12 per cent above guide price. It was a lower value investment property but by fully staging it he got a way higher price. It is completely relevant to every price bracket. There is no reason that a property at £200,000 can’t have value added to it with some staging.”

Agents’ increasing use of proptech is also making presentation more important, says Roomservice by CORT’s Swaddle, citing 3D walkthroughs as one example. “Here dressing becomes quite important because there is no hiding in a 3D walkthrough, you are seeing every single room for what it looks like. Some people rent furniture just for a 3D walkthrough and there are more and more companies using walkthroughs.” 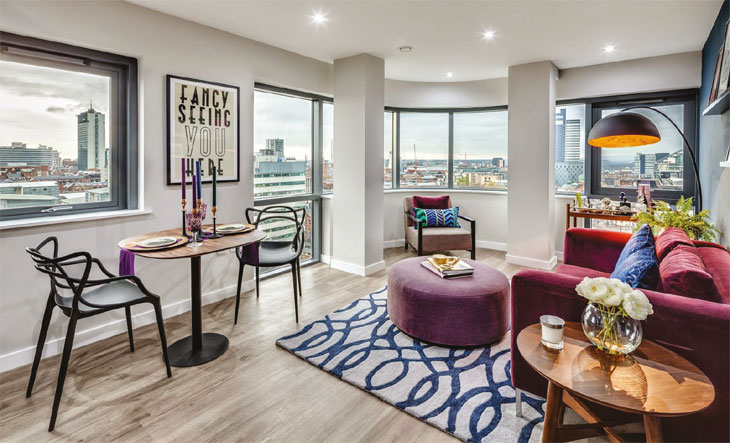 LOOKING FOR A LIFESTYLE

While people have always been looking at property with lifestyle in mind, this is even more relevant in today’s social media savvy world. “People like to have an Instagrammable home – if they can’t take a picture of it and be proud of it and put it all over Instagram they don’t want to live there, so in terms of aspirational living people are quite specific in what they want and what they are looking for,” says Swaddle. 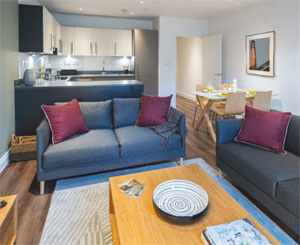 And buyers want more than just the vision now, adds Clark. “For 40 years developers have been ploughing a lot of money into show and marketing suites and these create a lot of expectations for first time buyers.

“They’ve effectively bought the show home, with the lovely wallpaper, drapes, accessories and scatter cushions. So now we are finding with a lot of the developers we are working with, people like Ballymore for instance, are recreating that show home at value for first time buyers.

“So first time buyers can move in and have everything furnished and brand new for a fraction of the show home price.”

This is equally true for investors, says Jonathan Stephens, MD of investment consultancy Surrenden Invest. “As buy to let gains in popularity, investors have become more savvy. Rather than buying an apartment and then trying to rent it out, they want to think much further ahead. They are buying 12 to 18 months off-plan with us and investors want to know now how they are going to best maximise their rent returns and limit their void periods.

“One of the things they can do to greatly improve that is to make sure they have good quality furniture packs in there.”

First time buyers can move in and have everything furnished with drapes and scatter cushions – all brand new for a fraction of the show home price. Andrew Clark, David Phillips.

The company has teamed up with David Philips to produce bespoke furniture for all of its sites and Stephens says more than 90 per cent of investors choose to purchase the furniture pack. “I haven’t seen one deal processed this quarter where the client hasn’t purchased the furniture pack from us.”

With investors and developers having already cottoned on to the idea that fabulous furniture is a must, it’s vital property professionals ensure their landlords and sellers do the same if they want to stay ahead of the competition.