The English Housing Survey has just been published and it reveals some fascinating facts about the fast-changing private rented sector.

1. Last year 787,000 tenants moved home within the private rented sector. Of these, 73% said they moved because they wanted while 11% or 86,600 tenants were asked to leave by their landlord – two thirds because the landlord wanted to sell or move back in, and a third presumably for bad behaviour.

2. Despite constant media coverage of rogue landlords and agents, the survey reveals that 71.4% of all tenants were satisfied with the way repairs and maintenance were carried out on their property.

But the survey also says 17.7% of tenants were unhappy with how their landlord looked after their property, leaving 9.5% not sure either way. 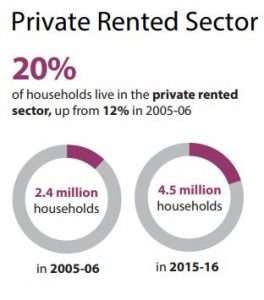 3. Being a tenant has yet to become as popular as home ownership, either. Just one in five renters or 21% quizzed by the report were satisfied with their status as a private tenant.

4. The research also reveals that the private rented sector is now significantly larger than the social rented one. There are 4.413 million private homes in the UK compared to 3.85 million local authority and social housing ones.

5. Key complaints among tenants are that their landlord doesn’t bother to carry out any repairs or maintenance, is difficult to contact, carries out shoddy repair work and that repairs are completely too slowly. 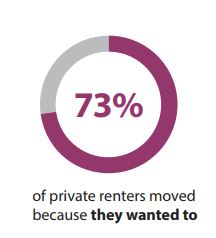 6. The English Housing Survey also reveals that talk of ‘generation rent’ is not exaggerated – although younger renter tend to be over-represented in surveys, the proportion of the rented sector who are between 25 and 34 years old has nearly doubled over the past decade from 24% to 46%, while the number of families with children has risen from 30% to 36% of all renters.

7. And talk of slum conditions within the private sector also looks less credible now – the proportion of non-decent homes, as the survey puts it, has dropped from 47% in 2006 to 28% in 2015.